How to Save Videos Posted by Other Snapchat Users

Mobile users like using Snapchat because it has excellent editing features. Although it is good to share videos via Snapchat, technically, Snapchat doesn’t allow its users to save videos posted by other Snapchat users. Nevertheless, you can take other measures to save the videos with an Android or iPhone device.

Snapchat is one of the rear photo and video sharing platforms that erases the content that is sent to you after you view it. Images, still or moving, are deleted approximately ten seconds after you view them, while they can remain stored on Snapchat’s servers for 30 days if you don’t open the message that contains a particular video or photo.

Moreover, saving the video posted on Snapchat by anyone else other than yourself, without the consent of the content’s owner is a direct violation of the platform’s terms and conditions. Attempting to save a Snapchat video without the owner’s permission and then using it publically is also considered copyright infringement.

Moreover, the app doesn’t allow you to save videos posted by other Snapchat users, but there are a number of things you can do if you really want to save Snapchat videos to your Smartphone.

How to Save a Snapchat Video with an iPhone?

If you are using an iPhone that runs on the iOS 11 or any of the more recent versions of this operating system, you can use iPhone’s screen recording feature to capture Snapchat videos. However, you should keep in mind that Snapchat notifies the person whose video you’re capturing as soon as the process starts, which is the reason why you should ask the owner of the video for permission to capture their content.

Here’s what you need to do in order to start capturing a Snapchat video with iPhone’s screen recorder.

Step 1. Before you can start recording a Snapchat video, you must first make sure that all screen recording features are workable on your iPhone. You can do this by opening the Settings app, and navigating to the Control Center menu. 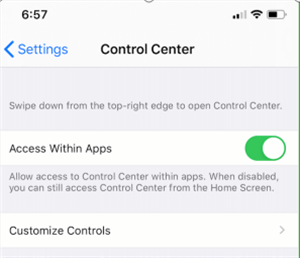 Navigate to the Control Center

Expand the Customize Controls submenu and then tap on the green plus icon that is located next to the Screen Recording app to add it to the device’s Control Center. 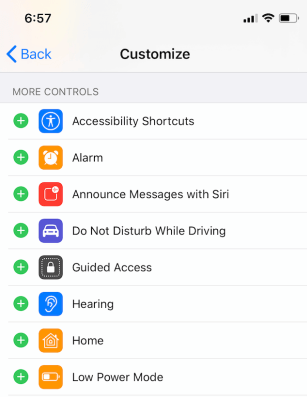 Add to the Device’s Control Center

Step 2. When done, head over to the Snapchat app and then swipe down from the top right corner to get access to the Control Center. Tap on the Screen Recording icon and the device will start capturing the screen within few seconds. 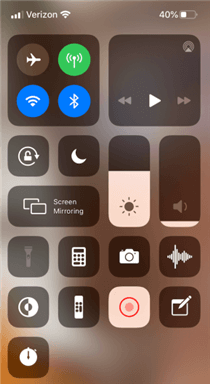 Step 3. Swipe up your iPhone to close the Control Center and then proceed to play the video you want to capture. Tap on the red bar in the upper left corner of the screen when you want to stop recording and then choose the Stop option from the prompt that appears on the screen. 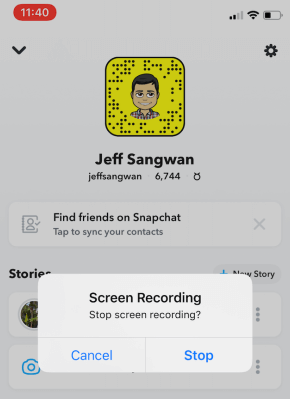 Play and Record the Video

The video you captured will be saved to the Camera Roll where you can continue editing it.

If you would like to have access to more screen capturing options, you can try installing an app like the DU Recorder that lets you customize each screencasting session. This app lets you choose the resolution and the quality of the video, and it allows you to set the preferred frame rate.

The app also contains video editing tools that enable you to polish the Snapchat video you recorded by removing the parts you don’t want to keep in the final version of the video or adding text or creating a soundtrack.

How to Save a Snapchat Video with an Android Phone?

The screen recording feature is not standard on all Android phones, but if you have a Samsung, LG, or OnePlus device you’ll be able to utilize its screen recording options. So, here’s how you can record Snapchat videos on Smartphones manufactured by either of these brands. 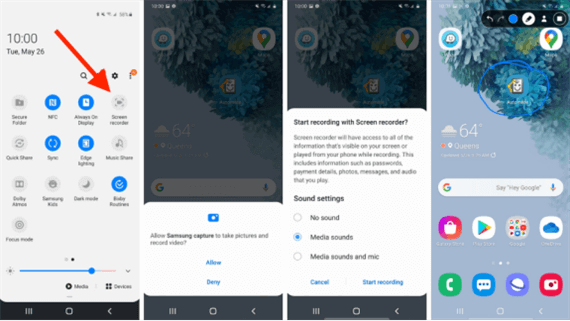 Save a Snapchat Video with an Android Phone

Step 1. Pull down the notification shade, and then tap on the screen recording icon. The device will ask you for permission to take pictures and record videos so just tap on the Allow option and continue to adjust the settings.

You’ll also be able to decide if you want to record a Snapchat video without sound, only with media sounds or with both mic and media sounds. Pick the option that best fits your needs, and then initiate the screen recording session.

Step 2. Launch the Snapchat app, and navigate to the video you’d like to record. Tap on it to play it, and let it play through until the end. You should tap on the Stop icon if at any point you want to stop the screen recording session.

Videos created with the Android phone’s built-in screen recorder usually need to be edited as they often contain parts you don’t necessarily want to share with your friends on social media.

In case you don’t have a Smartphone that is produced by Samsung, LG, or OnePlus, you will have to install a third-party app like the AZ Screen Recorder in order to capture a Snapchat video. This app grants you access to a broad range of screen capturing and video editing options so that you can easily select the quality of the video you’re making or choose the frame rate at which the video is going to be recorded.

Also, the AZ Screen Recorder doesn’t limit the duration of the recordings which allows you to record any video on Snapchat regardless of how long it is. You can shake your Android phone to stop a screen recording session and you can use the WiFi network to transfer the Snapchat video you recorded to a computer.

Although possible, saving a Snapchat video you didn’t create carries the risk that you’ll find yourself in violation of the platform’s terms and conditions. This can have further consequences as the platform might choose to lock your account temporarily or permanently.

If you decide you want to save a video that was posted on Snapchat by somebody else, you should first get in touch with that person to ask for permission to save that video. As Snapchat doesn’t allow its users to save videos that don’t belong to them, your only option is to use either the built-in screen recorder on your smartphone or install a screen recording app that will enable you to capture the video you wanted to save.

Was this article helpful? Leave a comment and let us know.