How to Use AirPlay on Mac

AirPlay is one of the really useful features offered by Apple. It allows Apple users to mirror content from one device to another – all without needing any cables at all. The technology works over a wireless network and lets you mirror one device’s screen to another as long as they are both compatible.

First of all, let us learn exactly what AirPlay is and how it works.

AirPlay is a feature embedded on your Apple devices including Mac and iOS devices that lets you mirror your device’s screen to another device. For example, you can mirror the screen of your iPhone to a compatible Apple TV, and so on.

This gives you a chance to view the contents of your iPhone or iPad on a large screen of your Mac or Apple TV. Since all the Apple devices come enabled with the option, there really is not anything you need to buy or download on your devices.

Enable and Disable AirPlay on Mac

Turning AirPlay on and off on Apple devices is pretty easy and it can be enabled as the following on your Mac.

Step 1. Click on the Apple logo at the top-left corner of your screen and select System Preferences.

Step 2. On the following screen, click on the option that says Displays. That is where the option we are looking for is located.

Step 3. Turn the AirPlay Display option to the ON position. 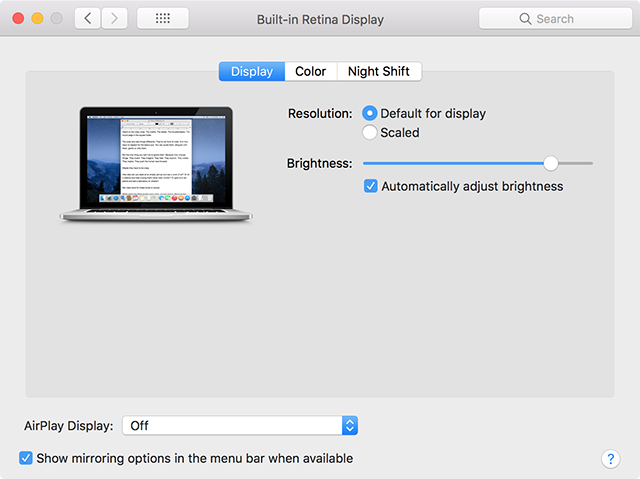 Enable the AirPlay feature on Mac

The feature should now be enabled and you will see its icon in the menu bar of your Mac. Clicking on the icon will let you see all available AirPlay receivers.

To turn the feature off, simply head into the same settings panel and disable the AirPlay Display option. You will be all set.

How to AirPlay from Mac to Apple TV

Now that you know how AirPlay works and how to enable it, let us check out how to use AirPlay on a Mac with an Apple TV.

All Apple TVs come equipped with the AirPlay feature and you can mirror your Mac’s screen to any of those TVs as long as the minimum requirements meet. In order to mirror screen from your Mac, both your Mac and your Apple TV should be connected to the same WiFi network.

Once that is done, follow the following steps on how to AirPlay from Mac to Apple TV to do the actual task of screen mirroring.

Step 1. Click on the AirPlay icon in the menu bar of your Mac to open the feature options. 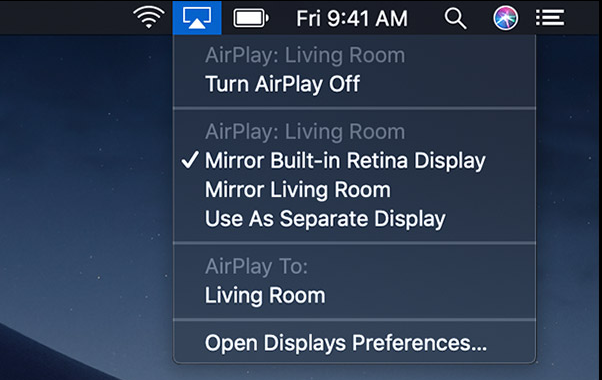 AirPlay from a Mac to Apple TV

Soon as a connection has been established, you will be able to see the screen of your Mac on your Apple TV. This is usually instant in most cases and you have successfully made an AirPlay connection between your compatible devices.

How to AirPlay from Mac to Samsung TV

Not everyone owns an Apple TV and there are Samsung and other TV users as well who would like to use the AirPlay features on their TVs. If you are one of them, this section will help you out.

In order to do screen mirroring from Mac to the Samsung TV, you need to install an app on your Mac. It is because the Samsung TVs are not compatible with Apple’s AirPlay feature and so you need to use a third-party app to bridge the compatibility gap.

The following shows what you need and how to perform the procedure on your Mac machine:

Step 1. Download and install the ‘Mirror for Samsung TV’ app on your Mac machine.

Step 2. Ensure that both your TV and your Mac are on the same WiFi network. Launch the app on your Mac and let it scan the available receivers.

Step 3. Click on your Samsung TV in the list and the app will start mirroring your Mac to your TV. 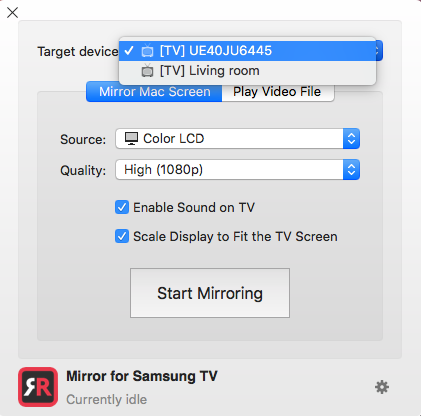 AirPlay from a Mac to Samsung TV

The app also gives you the option to transfer audio from your Mac to your TV if you would like to do it.

How to Fix AirPlay Not Showing up on Mac

There may be times when you will not see the AirPlay icon in the menu bar of your Mac. This makes users wonder as to where the feature is gone.

Fortunately, there are a few fixes to apply to get the option back in your menu bar.

Make sure the AirPlay receivers on your network are turned on and that specifically the AirPlay option is also enabled.

If your Mac does not find any AirPlay receivers on the network, it removes the AirPlay icon from the menu bar.

If you have not already enabled the AirPlay option on your Mac, you will not see the icon in your menu bar.

Head into System Preferences followed by Displays. Ensure the AirPlay option is turned on.

Reboot all of the devices you are trying to connect and it should likely fix the issue for you.

These are some of the things you can do when AirPlay does not show up on Mac.

If you have a Mac and you wish to use the AirPlay feature, the above should teach you how to AirPlay from a Mac machine. There are various ways to use the feature and you can go for the one that is convenient for you.