How to Get Customized Memoji in iOS 13

When you first use Memoji, you may need guidelines about how to edit Memoji, Animoji and Memoji Stickers that newly introduced by iOS 13. We’re going to show you all the details in this post.

Emoji was originated from 1997, and it became increasingly popular worldwide in the 2010s after being added to several mobile operating systems. Then new iOS will update more emoji almost every year, and Apple created enhanced emoji features in 2017. Till the release of iOS 13 last month, iOS 11, iOS 12 and iOS 13 update Animoji, Memoji, and Memoji Stickers in iMessage app once a year. Apple spices up your messages life with colorful Memoji style.

In this post, we are going to introduce you what’s new in iOS 13 with Memoji and Animoji. And keep reading, you will know how to get and share your customized Memoji with more options.

What are Memoji and Animoji

Animoji was first added in iOS 11. It’s known as an animated emoji feature, which is also an application of facial recognition built into the front-facing camera from iPhone X. With Animoji, you can mirror your facial expressions and record your voice message displayed by alien or other animals’ faces.

Memoji was first introduced in iOS 12. This feature allows you to express yourself with personalized and animated emoji. Memoji is very similar to Animoji, the only difference is Memoji can customize a 3D avatar in an emoji-like style besides Animoji features.

In the above, we mentioned that Animoji and Memoji are roughly the same emoji type but has a little difference. iOS 13 updates add a new button named Memoji Stickers: the three-headed icon and Animoji icon is still a monkey icon. Then you can create Memoji from those two icons. The specific updates are listed as following:

This function is under the new three-headed icon. It will automatically generate sticker packs based on your Memoji and Animoji characters. And Memoji stickers are available on the emoji keyboard of iMessage, Mails, and other apps like WeChat.

iOS 13 adds 30 new hairstyles, over 15 new pieces of headwear, more earrings, glasses, makeup even Airpods for you to customize Memoji on iPhone. They can be found in Edit interface under Memoji icon and Animoji icon.

If you got any problems when updating your operating system to iOS 13 or using new iPhone 11, you may need to know how long does the iOS 13 update take or check some iOS 13 and iOS 13.1 problems we’ve found.

How to Get Customized Memoji in iOS 13

After the introduction of new features about Memoji and Animoji, you must be curious about how to edit Memoji in iOS 13. With new features, you can create multiple Memoji for different appearances and moods. Here are the steps to customize your Memoji:

Step 1. Open Messages on your iPhone.

Step 2. Create the New Message window and enter the contact.

Step 4. Then you can customize with powerful options: Skin, Hairstyle, Brows, Eyes, Head, Nose, and so on. 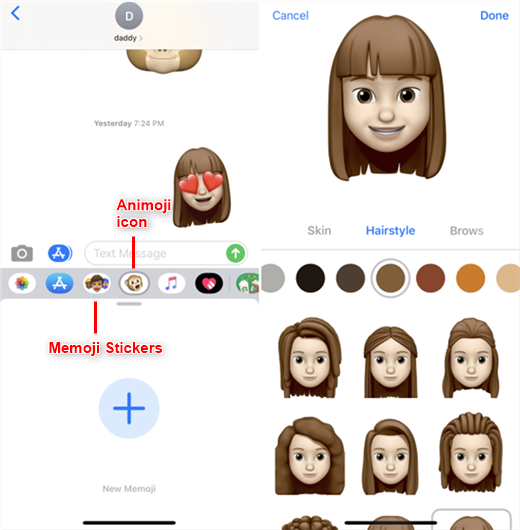 Step 6. Or you can also enter from Memoji Stickers icon – the three human faces.

Step 7. Tap the three dots on the left, and then you will see the options to create New Memoji, Edit, Duplicate or Delete. 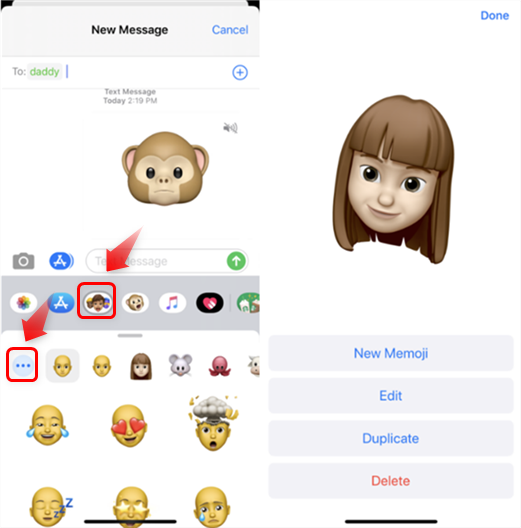 The full Memoji builder options are listed below:

How to Send Voiced Memoji and Animoji in iOS 13

After created customized Memoji with your likeness, you can send them as static Memoji stickers or animated Memoji. And also you can use personalized Memoji stickers on the emoji keyboard of some apps. If you want to send animated messages, including Voiced Memoji and Animoji, here are the steps:

Step 1. Open the dialogue box in Messages, and tap the Animoji icon – the monkey head.

Step 2. Find the Memoji you created, then you can Record your voice and facial expressions or tap the three dots to Edit again.

Step 3. Then tap the red square to finish recording, you can tap Replay to review.

Step 4. Next, Click blue Up arrow to send voiced Memoji with your likeness.

Step 5. Also, you can swipe up or scroll to send a monkey Animoji to contacts.

1. Memoji avatar is available now: iOS 13 updates allow you set Memoji as your profile of Apple ID and Contacts. Just click the three dots tap next to the “New Message” option.

2. You can get more stickers from App Store tap next to Memoji icon, then apply to messages.

3. If you find your iMessage app not working after update to iOS 13, some quick solutions may help you.

Emoji enriches Apple users’ life, Animoji and Memoji make emoji more interesting. New Memoji stickers and other expansions in iOS 13 allow you to customize the 3D animation with more options. Read the above introduction, you can easily edit the 3D humans to dress up like you. Send voiced Memoji and Animoji, and use Memoji stickers to express yourself. If you got any other findings of Memoji, please leave your comments with any emoji to us.