What Do People Do with Stolen iPhones? Be Aware of These Scams

If you are wondering “what do people do with stolen iPhones”, then you are on the right page. Here, we will tell you what things thieves do after stealing your device along with some scams you could encounter.

There are many people out there in the world who are living on stealing smartphones, especially iPhones – by snatching them from you. At present, iPhone stolen and lost has become common problem.

The majority of us listen to music while we were taking a walk alone with earphones. If the iPhone was put into an easy-snatched pocket. The thief would grab your earphone wire to get the iPhone out of your pocket and grab it running away. So, if you don’t put your iPhone in a safe place while you are walking alone, it makes you a target and it commonly happens at places like bus stops.

It is quite annoying if the iPhone was stolen which could release your privacy and also cause some losses. Therefore, you have to know what to do if your iPhone was stolen in time which may help you to get back your iPhone and protect the data. For example, you may need to know how to locate a lost cell phone even when it’s turned off, how to use Find My, etc. Besides, This article will discuss what will happen to the stolen iPhone. Let’s have a look.

What Do People Do with Stolen iPhones?

There are a lot of things that a thief could do with the stolen iPhone. You might get surprised to know that things that people do with stolen iPhones can make you face more serious problems. So, let’s give a closure look at all possible things that thieves do after stealing your iPhone.

Thing 1: The thief will erase everything on the stolen iPhone

They know several ways to do that, for instance, they sell a stolen iPhone too quickly after the stealing incident happens. In this way, a person whose device was stolen will not have much time to report it as stolen or lost and thus, it will make the device appear as clean.

Thing 2: Maybe the thief will break the stolen iPhone’s screen and ask for a replacement through AppleCare

Another thing that thieves may try to do that is to break the screen of stolen iPhone and then, try to ask for a replacement through AppleCare. Thieves somehow convince the AppleCare that they are the true owner of the stolen phone. And if the stolen phone is in the warranty period, then AppleCare processes its replacement request.

Thing 3: The thief will break the stolen iPhone into several parts and sell them for money

You may have probably known or heard about the shady stores that repair iPhones at a very cheap rate. That’s where the stolen iPhones go.

Thieves who realize that they can’t use the stolen iPhone will break the device into several parts and sell them to shady repair shops or stores for money. These types of stores need several parts of the iPhone, like the screen to fix someone else broken iPhone at a cheap rate. And thieves are aware of this thing and that’s why they sell some parts of stolen iPhone to them so that they can make some money.

Be Aware of These Scams

Thieves may send some scams that iPhone owners like you could encounter, and one of the most commonly used scams that thieves used is phishing.

Even if your iPhone was not stolen, thieves can try to ask your Apple ID credentials with a technique called phishing. There are some victims who get a phishing text or email that redirect them to a page that looks genuine and ask for your Apple ID.

Further, phishing scams you will get after your iPhone gets stolen is various forms, and emails and text messages are the most common –

You may get Apple ID scam in the form of the message. It would seem like “Your Apple account is now locked” and follow the below process to unlock your account.  Below is the example of Apple ID face text messages. 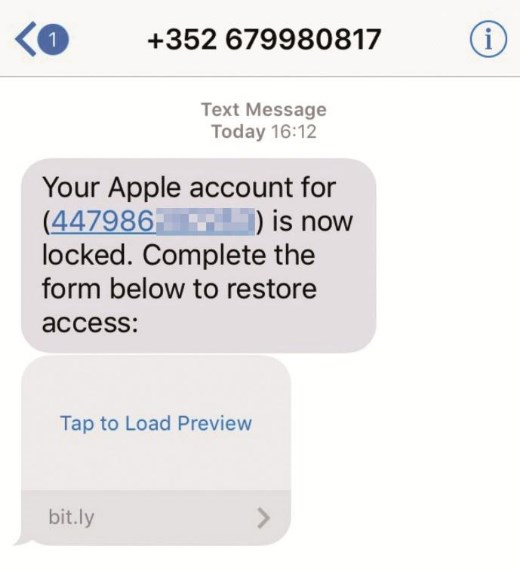 What Do People Do with Stolen iPhones – Fake Text Message

Just like phishing text messages to access your Apple ID login details, thieves could also send you an email version of the scam as shown below: 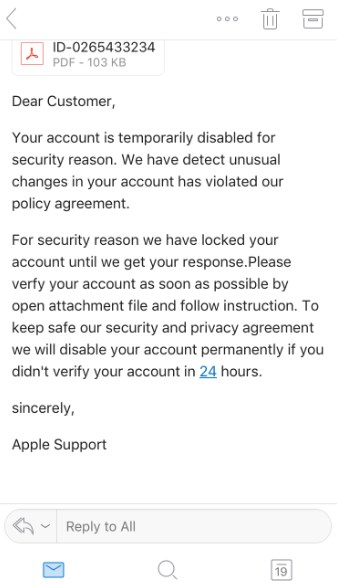 What Do People Do with Stolen iPhones – Fake Email

Keep in mind that phishing is one of the most commonly used technique that thieves used to erase the stolen iPhone for resale. But, the good news is that there are some solutions available you can try to avoid Apple ID phishing scams.

Solution 1: Don’t Give Your Apple ID Away

Recently, one victim reported that his iPhone gets stolen and afterward, he went to the store to purchase a new one. Shortly, he got the phishing message after activating Find My iPhone feature on the new iPhone. If he had fallen for that phishing text, then thieves would’ve accessed his Apple ID login details that they could use to unlock the stolen iPhone and erase his account from the device.

Thus, the best solution to avoid becoming a victim of phishing emails and messages is that don’t give your Apple ID away, no matter what.

Solution 2: Check for the Grammar and Spelling Mistakes

Once you get a text message or email that looks like come from Apple, check for the spelling and grammar mistakes. It is one of the easy and best ways to determine whether it is a scam or not.

If an email or text message you receive contains shortened URLs and dubious links, then it may be spam that thieves try to steal your Apple ID credentials.

That’s all on what do people do with stolen iPhones. As you can now see that thieves do so many unexpected things after stealing the iPhone. That’s why it is always advisable that be careful when you’re using your device in public areas. Even if your iPhone gets stolen, don’t ever fall for a phishing email and text spam that thieves can send you to steal your Apple ID so to unlock your stolen iPhone.