[Guide] How to Make Google Maps Default on iPhone

When upgrading to iOS 14, you have no idea of how to make Google maps default on iPhone. Eager to know how? Read this tip and grab this skill within simple steps.

I have just upgraded to iOS 14 and it seems Apple still doesn’t allow users to switch from Apple Maps to a third-party map app as the default app when clicking address links from iCalendar, etc.

Is there a way to set a third-party app like Google Maps as default on iPhone to launch when clicking address links from other apps? Many iPhone users have the problem that they can’t turn to Google Maps as their default choice. Because Apple maps have made a lot of improvements to be better, but it still has many bugs. Besides, many other Apple users get used to Google maps. When using Apple maps at the first time, there are lots of dissimilarities and dissatisfaction.

But actually, from iOS 9 to the new iOS 14, Apple has removed the ability to change Apple Maps on your iPhone. But do we have any other tricks to deal with the problem? Here we are going to introduce you the way to make Google Maps default on iOS 8 or previous versions, and iOS 9 or later.

Also Read: How to Transfer App Data to New iPhone >

How to Make Google Maps Default on iOS 8

Step 1. On your iPhone, tap on any address to make the operating system launch Apple maps app. You can use the following address as well. If it doesn’t work in Safari then copy and paste it in the Notes app and try again.

Step 2. When in Apple Maps tap on the ‘Car’ icon to tell the app to start routing.

Step 3. Now on your screen, you will see three tabs. One of them should be for ‘Apps’, tap on it.

Step 4. From the list of apps select the Maps application you want to use instead of Apple Maps. Simply tap on the Route button located next to it. On this screen, you will also get a list of related apps that are available in the App Store. 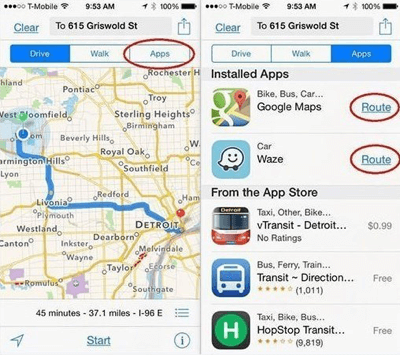 How to Make Google Maps Default on iPhone

Once you are done with the steps above your iPhone will always launch Google Maps whenever you tap an address. And this tip works for iPad, too.

This tip just works for setting Google Maps on iPhone with iOS 8, or previous versions; For iOS 9/10, there is nothing we can do to change iPhone default map app for now. But if you have or find one, please share it with us in the comments.

How to Jailbreak Your iPhone to Make Google Maps Default

Mapsopener allows you to use Google Maps for all map links. It defaults to open up Google Maps when clicking any address links, including those that directly link to the Apple Maps and Safari. With this plugin, when you tap any physical address in Contacts, Messages, Notes, and others, it always opens in Google Maps.

Bonus Tip: How to Change Apple Maps to Google Maps on any iOS

After reading the above methods to set iOS default Google Maps, there’re still restrictions for different iPhone operating systems. But you can use another skill about how to change Apple Maps to Google Maps on any iOS. Follow these steps to use Google Maps: 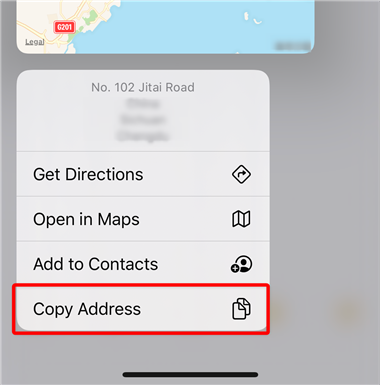 In this way, you can easily get to any address in Google Maps.

iOS 10 and later enable us to remove some built-in apps, including Apple Maps, Books, Calculator, FaceTime, Stocks, and others you less commonly used or you just don’t like. Therefore, you can delete Apple Maps, and apply Google Maps as a default map on your iPhone.

After misguided by Apple Maps at some time, iPhone users gradually love third-party map apps like Google Maps. Although Apple has removed the ability to switch from Apple Maps to a third-party map app as a default, there’re relevant solutions according to the different operating systems of the iPhone. If you have any questions when applying the above methods, or you got any ideas about how to default Google Maps, you can leave messages in the comments below.