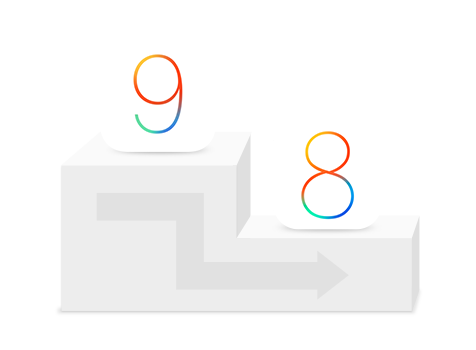 How to Downgrade iOS 9 to iOS 8 Smoothly

Although every year Apple says its new iOS is the biggest and greatest release, after upgrading to new iOS, many users find their iDevices are stuck on some tough iOS problems, like work slowly, can’t charge, make a call or text a message, etc. Some of them are enough lucky and get a way to fix their problem, but some unfortunate men failed to solve it after trying many methods. At this moment, they have to consider the last solution – downgrade to the older iOS version.

Each year, we would prepared an article that collected the most common iOS problems and solutions to help users fix the iOS issues they met during iOS update. Therefore, after iOS 9 is released, except preparing the common iOS 9 problems and solutions, (The Most Common Problems for iOS 11 in 2017) we also prepare this tutorial – How to Downgrade iOS 9 to iOS 8 so that you still can restore to iOS 8 if you cannot fix iOS 9 issues. And in view the fact that the latest available iOS version is iOS 8.4.1, so in this guide we’ll focus on how to downgrade iOS 9 to iOS 8.4.1.

Things You Need to Know Before Downgrading

Important Things You Need to Know Before Downgrading to iOS 8.4.1

1. You will be able to downgrade back only to the latest iOS version (which is iOS 8.4.1 currently).

2. Make a full backup of your iPhone or iPad with iTunes or iCloud so that you can recover your data from backup you made if in worse situation.

3. This process involves wiping your device, and restoring it from a backup, so it will take some time that depending on how much data needs to be recovered.

4. Once downgraded to iOS 8.4.1, you can't restore your iPhone or iPad from an iOS 9 backup any more. You only can restore from the backup you made on iOS 8.

5. This tutorial below will allow you to downgrade iOS 9 to iOS 8.4.1 as long as Apple is still signing the iOS file, and it won't last long after iOS 9 is launched. So don't hang about if you want to downgrade to iOS 8.

Although you can't restore your iDevice with iOS 9 backups or use them directly, you can use some iOS backup extractor like iMobie PhoneRescue to extract anything you like from iTunes or iCloud backups, like Photos, Messages, Contacts, Notes, Calendar Events, etc.

How to Extract Files and Data from iTunes Backup >

How to Download iCloud Backup and Get Files from It >

Step 1: Make a full backup of your iPhone iPad.

You can follow this guide to back up all the contents on your iDevice, even the music, videos, movies, messages, etc.

Step 4: Connect your iPhone or iPad to computer with its USB cable and then launch iTunes on your computer.

Step 5: Once connected, place your iPhone or iPad to DFU mode: Press the Power and Home button for ten seconds, release the power button when you see the Apple logo appear on the screen of your iDevice and keep pressing the home button until an iTunes window pops up and says "iTunes has detected an iPhone (iPad) in recovery mode. You must restore this device before it can be used with iTunes."

Step 7: In iTunes, click Summary tab, look for the "Restore iPhone/iPad" button – on a Mac, Option click that button, on a Windows computer, Shift click that button. And then navigate to the iOS 8 ipsw file you downloaded earlier.

Step 8: Click the Restore button when asked to confirm.

Step 9: Let the downgrade process complete, when finished the iPhone or iPad will reboot into fresh iOS 8. And then you need to set up your iPhone by following this guide: How to Set Up and Activate Your iPhone >

Important Note: Keep in mind that you can't install to a previous version of iOS 8 since the iOS 8.4.1 is only version that is singed currently by Apple. So this process won't work any more once Apple stops signing the iOS iOS 8.4.1.

Join the Discussion on iOS 9 Upgrade