How to Find Blocked Numbers on Android

If you need to learn how to find blocked numbers on Android, this article will provide you with detailed instructions that anyone can follow regardless of their technical skills.

Blocking numbers on phone is a much-needed defense against spamming, unsolicited calls or messages from salespeople, and a quiet way to keep annoying acquaintances at bay. Some people use this feature with regularity, and even those that don’t would be well advised to start filtering their contacts to a certain extent.

After a while, if you’d like to unblock someone, or check which contacts have been already included in the ‘black list’, we will cover several methods that can quickly reveal the full list of blocked numbers. Here is everything you need to know about finding out which numbers you already blocked, and which ones are still allowed to contact you.

Also Read: How to Block and Unblock Someone on WhatsApp >

Find my Blocked Contacts List from the Phone App

In order to know which numbers to block, your Android phone must store the full list internally and you can view this list if you manage to find it. While the menu system differs from one Android phone to the next, you can usually find the blocked numbers list within the Phone or Contacts app. Follow those steps in order to locate the list of blocked contacts and view entries on it:

Step 1. Find the icon for the Phone/Contacts app on your Android device and tap on it.

Step 2. In the next screen that appears, tap on the three dots located in the upper-right corner to open the Settings menu.

Step 3. Scroll through the menu until you find the Blocked numbers option and tap to activate it.

Step 4. Review the numbers on the list and decide whether to add new ones or to remove some that have been blocked in the past.

For those looking for another way how to find blocked numbers on Samsung or another device running on Android OS, there is an additional possibility to explore. Since messages sent from blocked numbers won’t be displayed in your normal SMS feed, you can find them in the archived folder and hence deduce which numbers have been blocked or the old phone numbers have been forgotten. While most Android phones don’t have a separate folder where blocked messages are kept, it’s still very easy to find such texts if you follow the correct procedure.

To find blocked numbers from messages:

Step 1. Open the Messages app on your Android smartphone.

Step 2. Tap on the three dots icon in the upper right corner to enter the menu.

Step 3. Choose Archived and then Blocked from the menu.

This action will show you for the first time whether any messages from blocked numbers have arrived without you being notified. Once you find blocked messages, you can decide whether to access and read them even without having to permanently unblock the sender’s number.

How to Block and Unblock a Phone Number on Android

On Android phones, you can easily block as many numbers as you want, or unblock some of them later if you so decide. Here is how to add a number to your block list:

Step 1. Open the Phone app on your Android device.

Step 2. Find three dots in the upper-right corner of the screen and tap on this symbol.

Step 3. Open Call history and find the number you want to stop from contacting you.

Step 4. Tap on the chosen number, and then on Block. 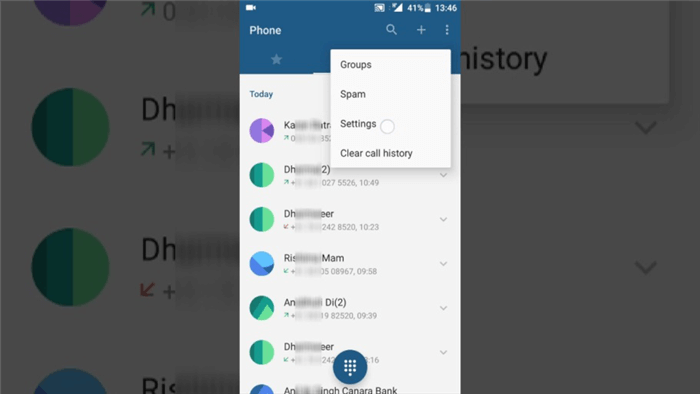 Block a Phone Number on Android

You can also set up your phone to ignore all calls from hidden or unknown numbers. This will guarantee your peace and protect your privacy, and it can be done with just a few clicks.

If you want to unblock a number, you need to follow the same procedure you would use to check which numbers are currently blocked. When you find the list of blocked numbers in the Phone app, you need to select the one that you want to return to normal status. Tap Unblock, and the number will no longer be blocked on your Android phone.

Whether we like it or not, managing your privacy settings is necessary, and updating your list of blocked numbers will protect you from disturbance. You can easily block and unblock someone here, including adding or removing numbers from this list.