[Solved] How to Recover Lost Messages After iOS Update Quickly

In order to get better functions and services, iPhone users always update iPhone to the latest iOS system. However, no matter how attractive the new features are, there will inevitably be some bugs and issues in the iOS system, and one of the common problems is that people lost messages after iOS update.

That iPhone messages disappeared after update is very annoying because messages contain a lot of important data and precious memories. If you fall into the same situation, how can you get back your lost data? In this post, we’ll help you retrieve the lost or missing messages on iPhone, even if no backup is available. This post applies to iOS 15 and previous iOS versions.

Why did my text messages disappear on my iPhone? Most likely that is caused by some bugs in the iOS update. So how do I get my messages back on my iPhone after update? Considering that most people do not have the habit of regularly backing up their messages, we recommend using data recovery software to recover messages disappeared on iPhone directly from iOS devices. PhoneRescue – iPhone Data Recovery is such a professional iOS recovery tool that allows you to easily retrieve missing messages on iPhone even without backup. Here are its detailed features.

Don’t hesitate! Download PhoneRescue now to see how to recover lost messages after iOS update step by step!
Step 1. Open PhoneRescue for iOS on your computer > Connect your iPhone to the computer and select Recover from iOS Device mode. 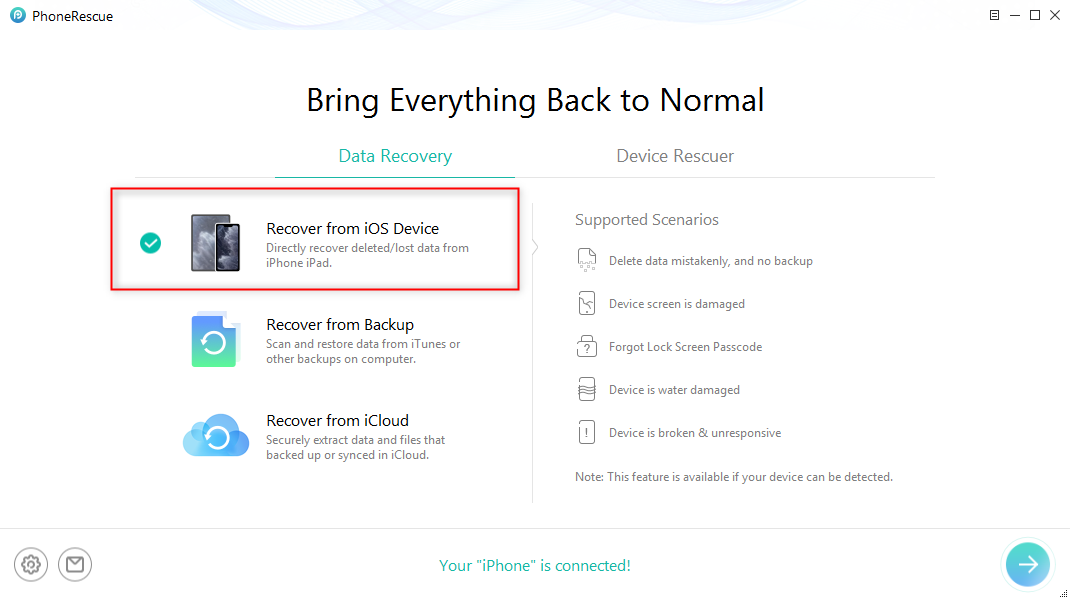 Step 2. Only tick Messages and click OK to go on. 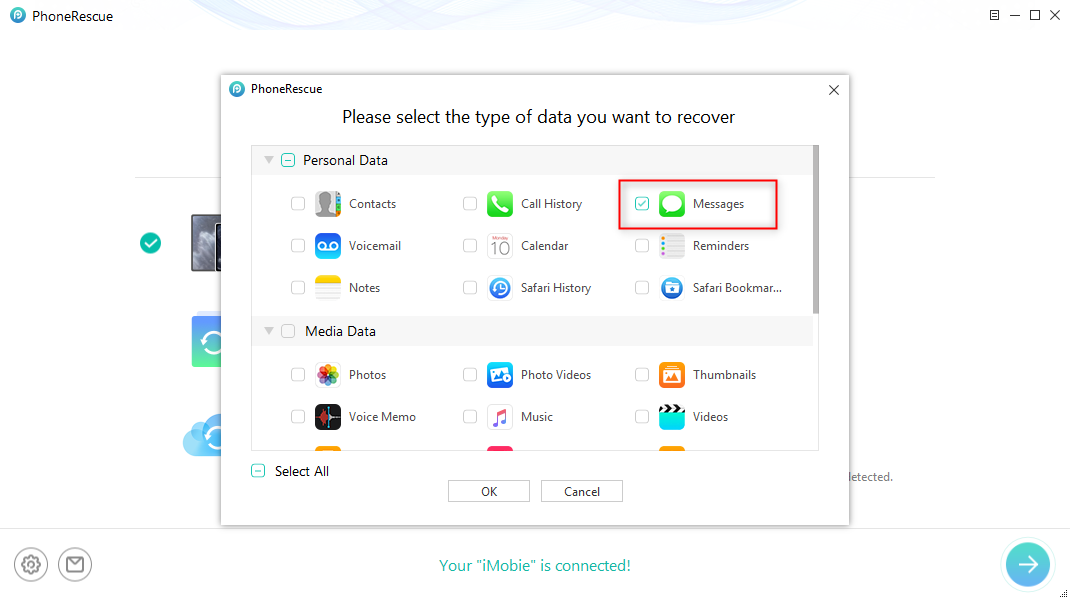 Step 3. Preview and select the messages you want to recover > Click the To Device button or To Computer button according to your needs. 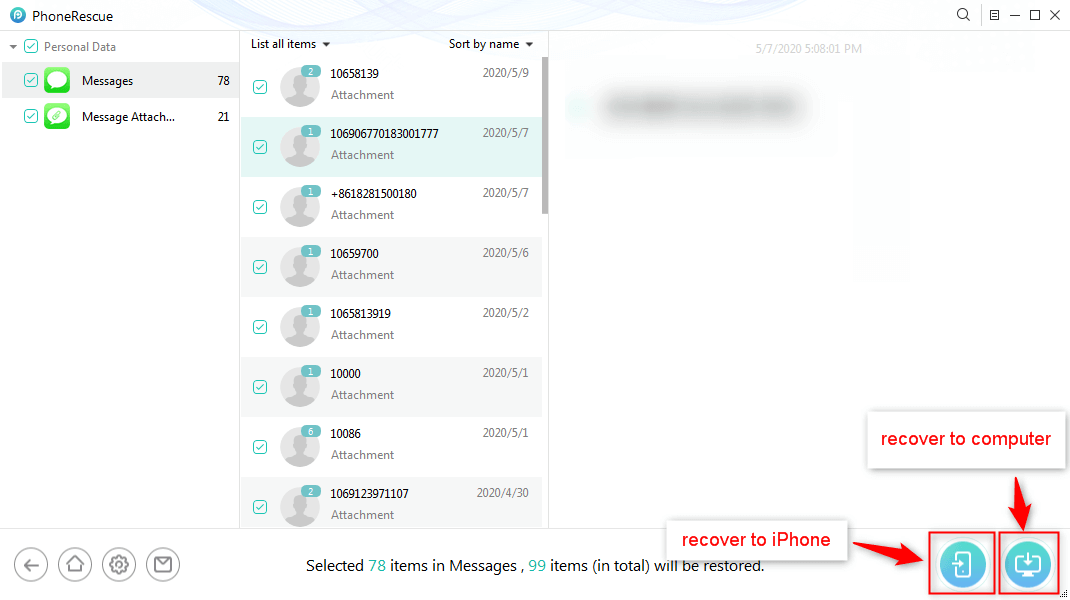 A message missing from your iPhone is not really gone forever, it has just been marked as deleted and stayed somewhere on your phone till been overwritten by new messages. That’s why the best iOS data recovery can help you get them back even without backup. Once the invisible deleted messages have been overwritten, no tools can help you make it. So, stop using your iPhone and act right now.

For those who have backed up messages before, if your iPhone messages disappeared, you can also try to restore missing text messages on iPhone by your backup. The most commonly used backups for iPhone users are iTunes backups and iCloud backups, so then we will explain how to recover lost messages after iOS update from these two aspects.

Before using iTunes to recover missing text messages, you need to be aware that once you restore data with iTunes, the original files on your iPhone will be erased. Here is how to get back text messages disappeared on iPhone with iTunes.

Step 1. Launch iTunes on your computer > Connect your iPhone to the computer.

Step 2. Find and click the Device icon on the left > Press the Restore Backup button in the Backups interface. 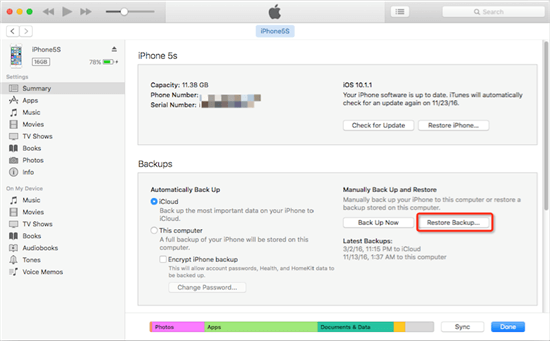 Step 3. Select the backup containing your lost messages after iOS update and restore them.

Step 1. Download and run PhoneRescue for iOS on your computer > Select Recover from iCloud. 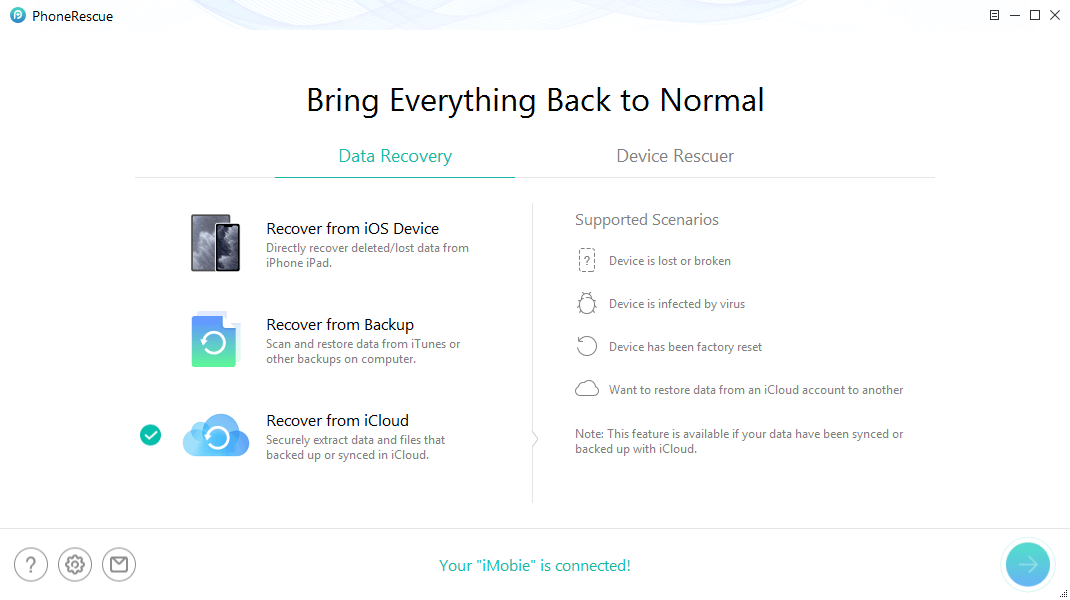 Step 2. Sign in with your Apple ID and password, then you’ll come to this page, select iCloud Backup. 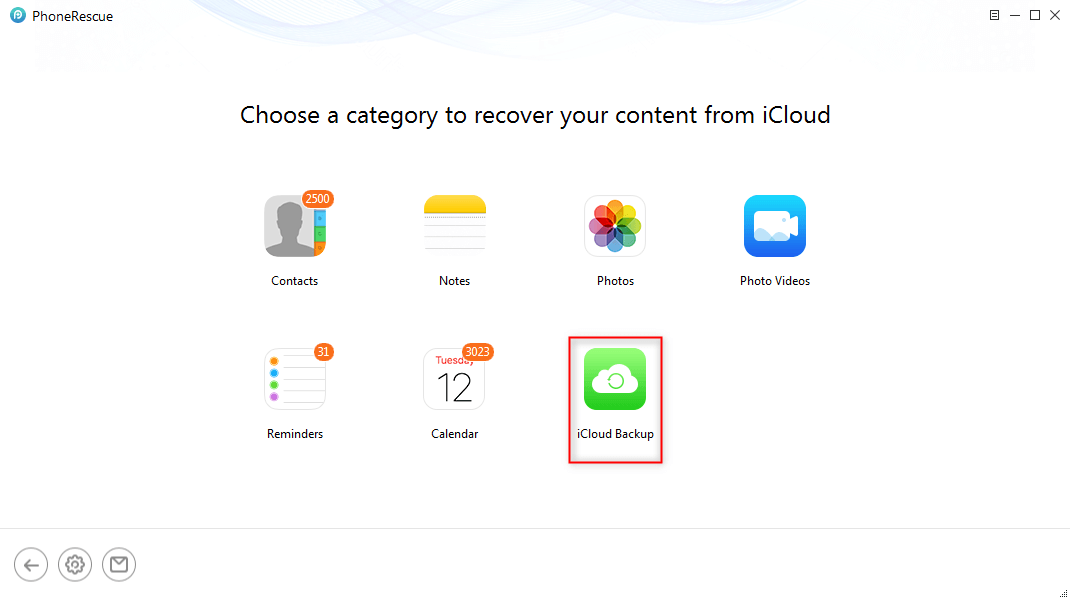 Step 3. Choose the iCloud backup that contains the lost text messages > Click Download > Then it would pop up a screen for you to choose data types you would like to recover, so check Messages > Click OK button to continue. 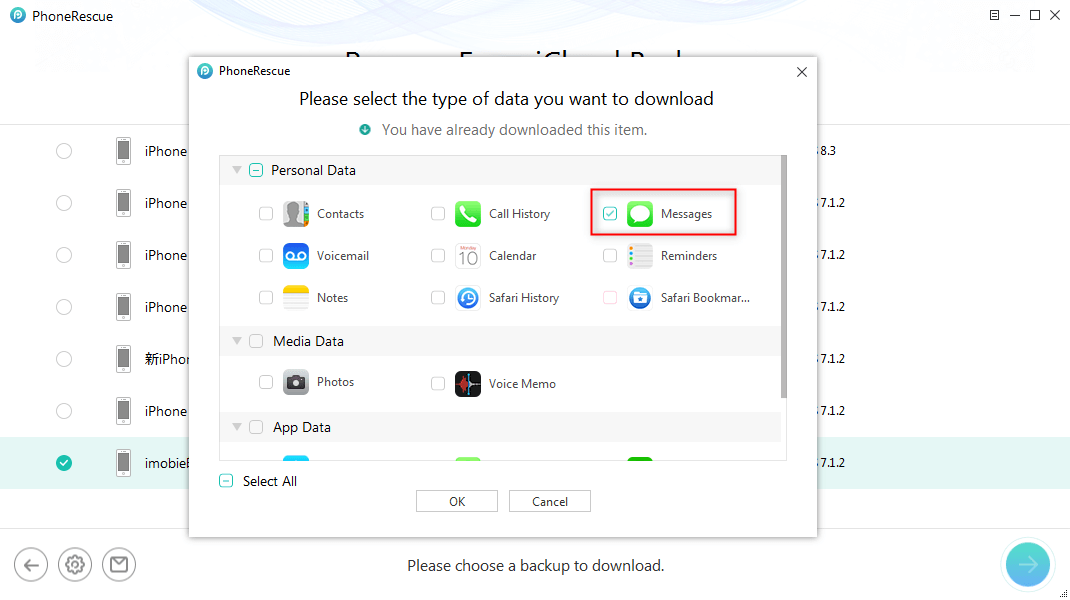 Step 4. After downloading, select Messages or Message Attachment > Preview and select the messages you want to recover > Click the Recover button base on your needs. 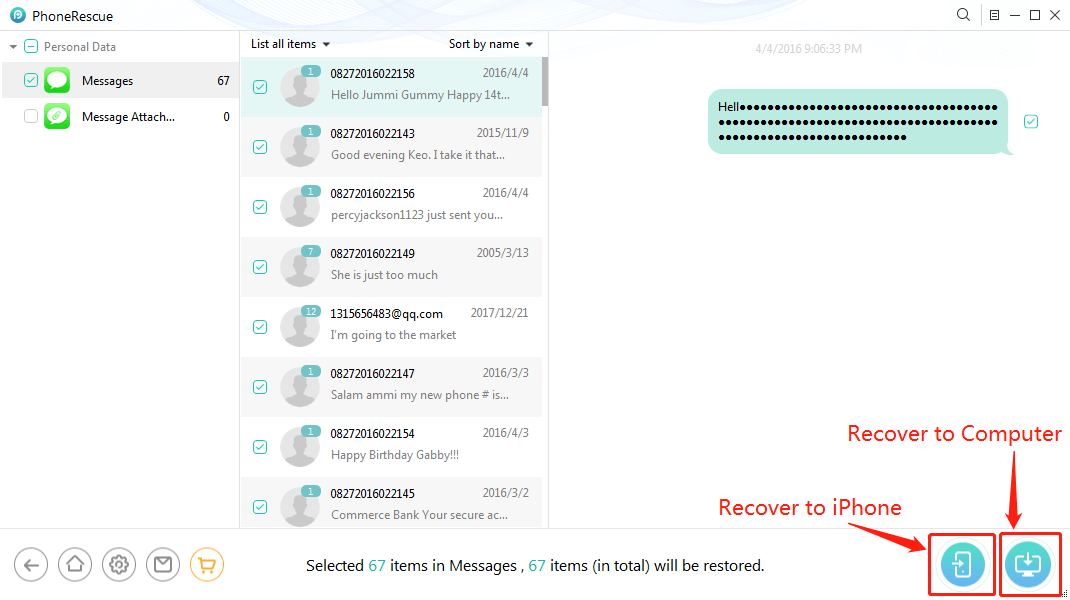 Save Messages from iCloud

After the force restart, check your iPhone to see if the iPhone messages disappeared after update have been recovered.

After recovering the missing text messages, some users may also want to fix the bug that iPhone update deleted text messages or some other issues brought by the iOS update, like iPhone stuck on a black screen, frozen after updated, etc. You don’t have to panic. AnyFix – iOS System Recovery would help you out of these issues with just a few clicks. What are the features of AnyFix? Here is the list.

No matter how emergent the issue is, you can handle it in minutes with AnyFix. If you meet some issues after updating iOS devices, you can give AnyFix a try. 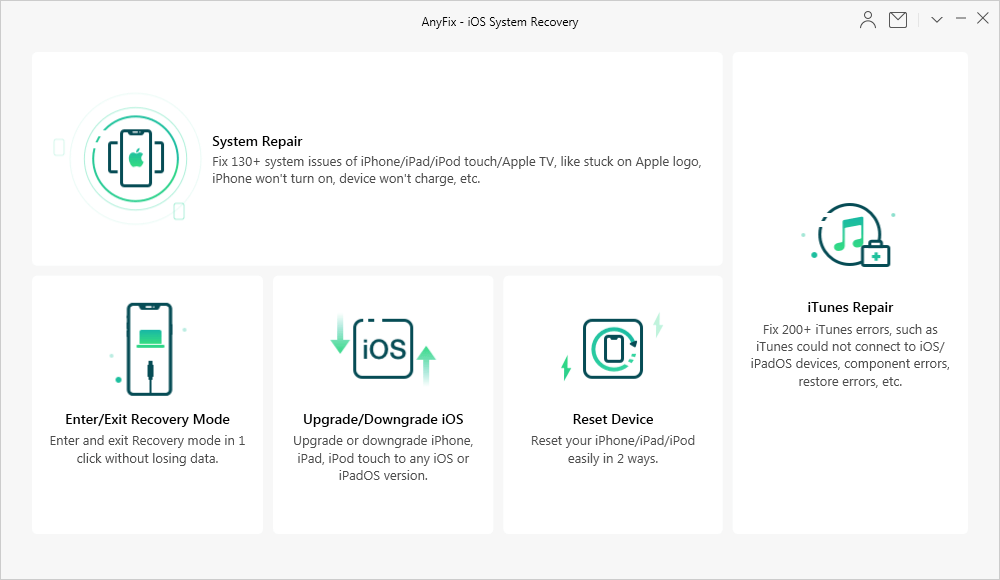 That is all for how to recover lost messages after iOS update. As you can see from above, using PhoneRescue for iOS to recover lost iOS messages is easily and quickly, and no risk of data loss. And even if you don’t have any backup, you can also use it to recover missing messages on iPhone. Download PhoneRescue to have a try now!