iPhone iPad Contacts Lost after iOS 15 Update? How to Recover

Are iPhone contacts missing after iOS 15 or iOS 14 updates? Don’t know why are your contacts gone after iPhone update? This guide will show you how to get back your deleted or lost contacts that you lost after iOS update, even if you didn’t back up the contacts before. Applies to the old iOS system, including iOS 11 and earlier.

The new iOS version – iOS 15 is coming, bringing plenty of significant improvements and enhancements. Things we do all the time on iPhone iPad, like launching Camera and typing with the keyboard, prove to be faster than ever. The new iOS does improve our overall mobile experience.

How to Recover Lost Contacts after iOS 15 Update

There are several ways you can use to retrieve the missing contacts, no matter you have a backup or not.

Method 1. How to Recover iOS 15 Lost Contacts without Backup

For those users who made no backup before the iOS update, there’s still a reliable and safe way to recover the lost contacts – PhoneRescue iPhone data recovery. It supports previewing and selecting the deleted contacts before the recovery process. Moreover, PhoneRescue enables you to retrieve the deleted contacts to your iPhone’s Contacts app directly, even lost contacts on iPhone 12, just like you never lost them.

Let’s follow the detailed steps to recover those contacts that you lost after the iPhone update.

Step 1. Freely download PhoneRescue for iOS on your Mac/PC computer > Install and open it.

Step 2. Connect your iPhone to the computer via a USB cable > Choose Recover from iOS Device mode > Click Right Arrow to continue. 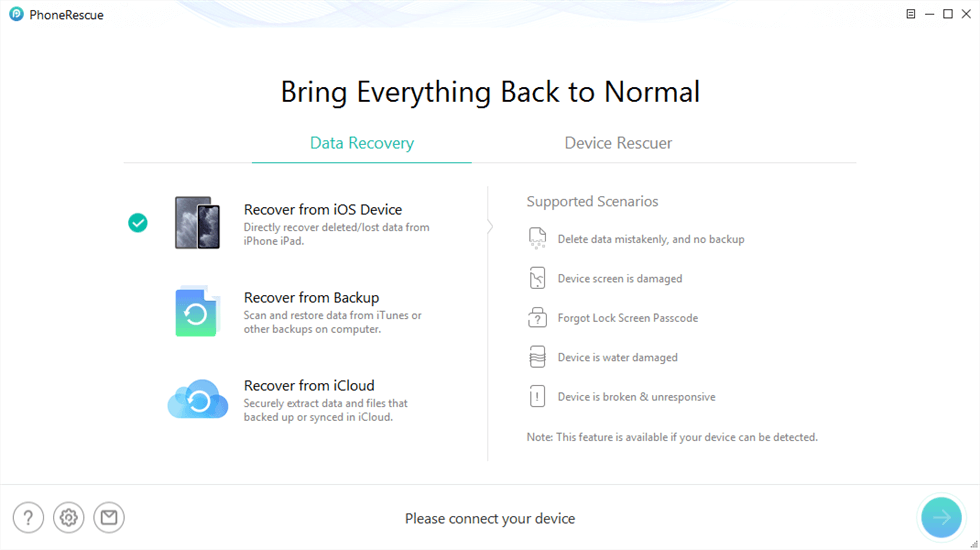 Step 3. Uncheck Select All option and check Contacts only > Click the OK button to go to the next page. 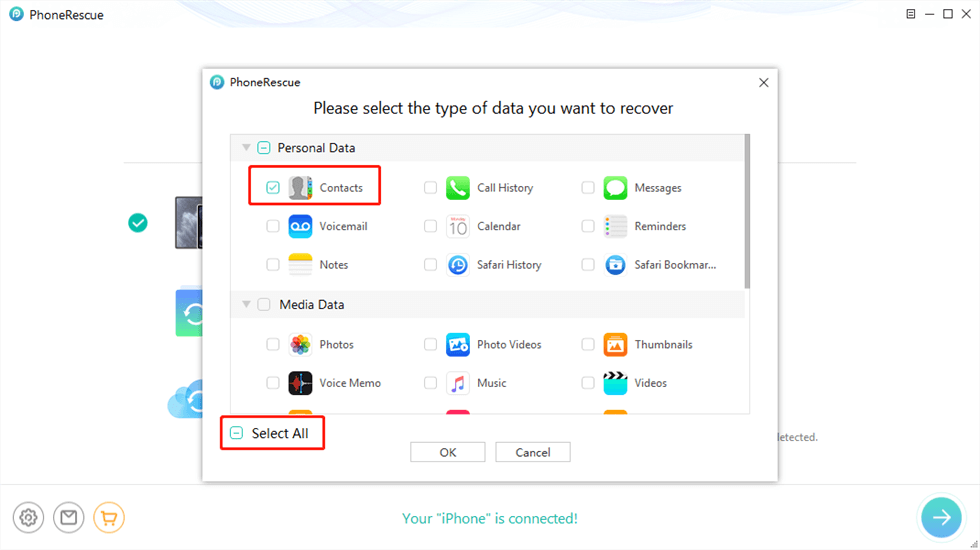 Step 4. Preview and select the contacts you want to recover > Click To Device button to retrieve lost contacts to your iPhone directly or choose To Computer to store them on your computer for a backup. 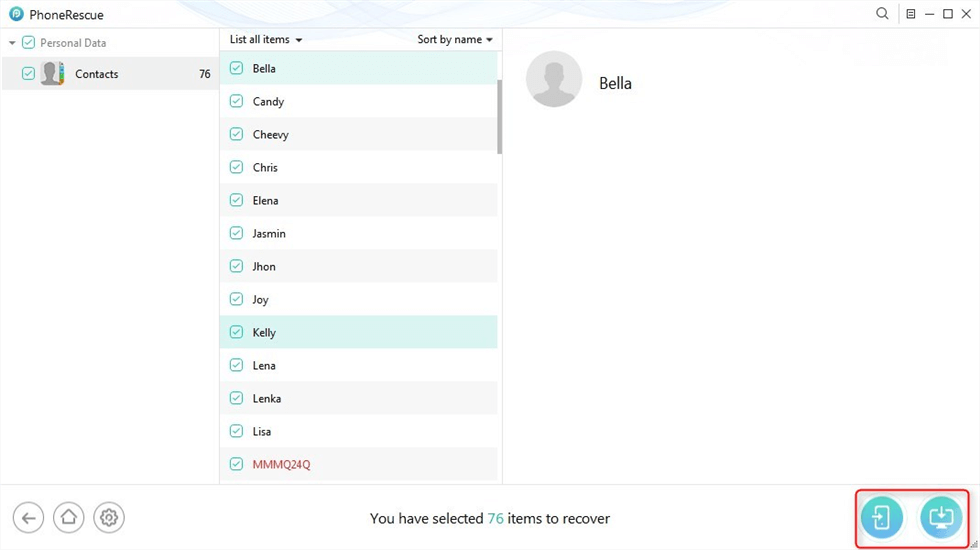 Beyond data recovery, PhoneRescue iOS data recovery also features iOS repair function. It helps you fix your iPhone and iPad from any type of breakdowns like stuck on a white Apple logo, continuous reboot loop, or black screen. Just try the Free Trial Version of PhoneRescue for iOS to be your good helper.

Method 2. How to Recover iOS 15 Missing Contacts from Backup

How do I restore my iPhone contacts after an update? If you have backed up your iPhone with iTunes or iCloud before the iOS update, then you can easily get back lost contacts by restoring from the backup. But you’d better You must be 100% sure that the backup you choose includes the contacts you lost. Otherwise, restoring from iTunes or iCloud backup is not a wise choice, as both of the two require you to erase all data and settings on iPhone before the restore process.

How to Restore Only Contacts from iTunes Backup without Erasing Data >

How to Restore Only Contacts from iCloud Backup without Erasing Data >

Step 1. Open iTunes on your computer > Connect your iPhone/iPad to the computer via a USB cable. 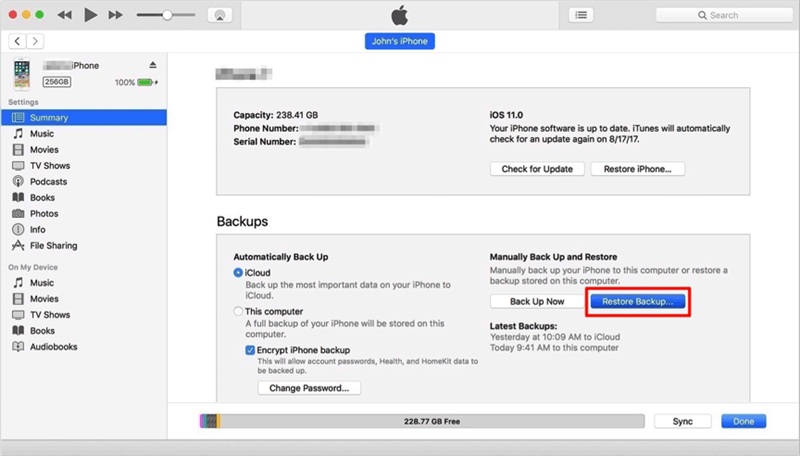 Step 3. Select one backup contains the data you want to restore and click “Restore” to start the restoring process. 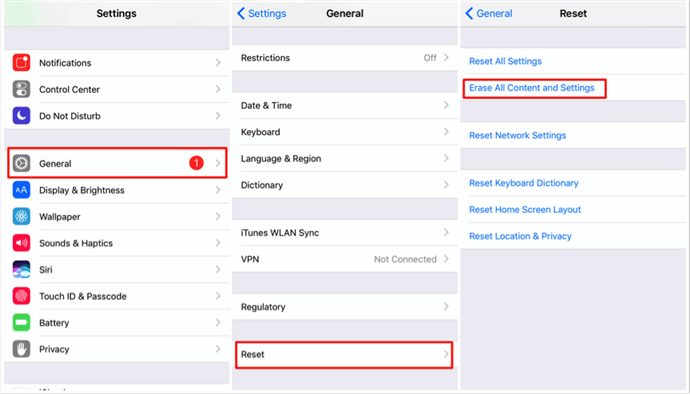 Step 2. Reach the Apps & Data screen and tap Restore from iCloud Backup > Sign in to iCloud > Choose backup > Select the iCloud backup contains the data you want to restore.

Method 5. Re-sync iCloud on the iPhone

Sometimes the new update is a little bit slow to complete the whole sync from iCloud. That’s why you need to re-sync your contacts via iCloud on the iPhone manually. But it’s quite easy and won’t take much time.

Just go to settings > Click on your name > And then tap the iCloud button > Choose the Contact and turn on the syncing option. Now your contacts on iPhone and iCloud would be merged and also be re-synced. 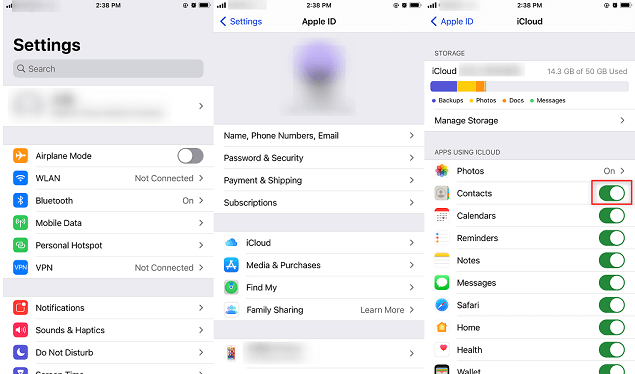 With the above several ways, you may have successfully recovered lost contacts after the iOS update. If you will meet other iOS update errors, feel free to leave them in the comment section below, we will go through the problem and help you out soon. Lastly, try PhoneRescue for iOS to rescue the lost data as well as your dead iPhone.