What Does Reset End-to-end Encrypted Data Mean on iPhone

The end-to-end Encrypted data feature is to be created to keep data secure, but if we choose to reset end-to-end encrypted data to finish setting up iCloud, then it starts restoring in the new iPhone from the iCloud.

Before going into detail, we should know about End-to-end Encrypted Data, So to keep your data secret from hackers or others. Data is to be sent from the sender, and it will be received by the receiver. There is no middle party to be there to see your data. Users can send end-to-end encrypted messaging, email, file storage, many more.

What is End-to-end Encrypted Data on iPhone/iPad?

End-to-end Encrypted Data is another security function that is built by the Apple organization, which provides the highest level of security to put any type of data secure. Data will be protected with the help of a key and then delivers some kind of information to another user in encrypted form. And it requires two-factor authentication to verify on another trusted device. End-to-end Encrypted Data is available in all types of devices of the same organization, for example, iPhone, iPad, and Mac.

Advantage of the End to end encryption data on iPhone/iPad

What Does Reset End-to-end Encrypted Data Mean on iPhone?

Users need to buy an iPhone to understand it in detail. As soon as the user configures the iPhone, then whatever or any type of data that is present over the iPhone is taking backup on iCloud. It is difficult to say if the user sets up the data backup manually or if it can be taken automatically on the iCloud.

If your iPhone is misplaced or you buy a new iPhone, then users add their old phone credentials at the time of configuring the new iPhone. Then during configuration, a message pop-up with two options that is tap on Allow or Reset the encrypted data.

In most cases, users are not able to get complete data backup because automatically, data backup is running in a very short interval of time.

What Happens if I Reset End-to-end Encrypted Data iPhone?

After tapping the reset End-to-end Encrypted Data then it starts restoring in the new iPhone from the iCloud. As we discussed above, the term encrypted means network security at the time of transferring the data from one iPhone to another iPhone. All types of data are to be transferred from small packets with the help of routers. However, all small packets are locked and contain the personal key. Without that personal key, data can’t open. After reaching the correct opposition, all the personal packet keys are automatically entered, and the user is able to view the packets in the form of data.

How Do I Reset End-to-end Encrypted Data on iPhone/iPad?

There are many ways to reset End-to-end Encrypted Data, and you can fix reset end-to-end encrypted data keeps popping up on iPhone/iPad with the following methods:

For iOS 11 and above or iPadOS：

iOS 11 data can be encrypted by resetting every setting from Apple iPhone for that user to accomplish all the steps that are given below.

Step 2. Now the user needs to tap on the Reset all the setting option that is available over the screen.

Step 3. Enter the iOS Passcode. Now the user needs to check all the settings to reset. After that, all basic settings are going to reset, such as display brightness, Home screen layout, and wallpaper, and many more.

Step 4. Now, users join their iPhone again to iTunes and also create an encrypted backup of their iPhone.

For iOS 10 or lower or iPadOS：

Over this iOS, users need to create a new backup when the user isn’t able to think that the encrypted password will remove all your things and settings. Check out the steps that are given below.

Step 1. The user needs to visit the setting of the iPhone > General Setting > Reset Option.

Step 2. Tap on the Erase all content settings. Now a new iOS password is to be created.

Step 3. After this user will clear all the things from the Apple iPhone. With the help of end-to-end encryption.

What Will I Lose if I Reset Encrypted Data?

Reset data encrypted means users forget their passcode and cannot enter it into the device at that time. There is only one option left that is to reset encrypted data. It is a complete loss of the information present in the device, and it is not backed up over the iCloud. There was no big loss after resetting encrypted data.

What will lose: Home data, Health data, iCloud Keychain (includes all of your saved accounts and passwords), Payment information, Siri information, Wi-Fi network information. That is to say, you will not lose messages if reset end-to-end encrypted data. Because iCloud backup will include a copy of the key protecting your messages if you’ve enabled it.

Further Reading: How to Restore Messages from iCloud to iPhone >

Step 2 – Now the user launches AnyUnlock in the computer. After that, the user needs to click on the Remove iTunes Backup Encryption option over the computer screen. 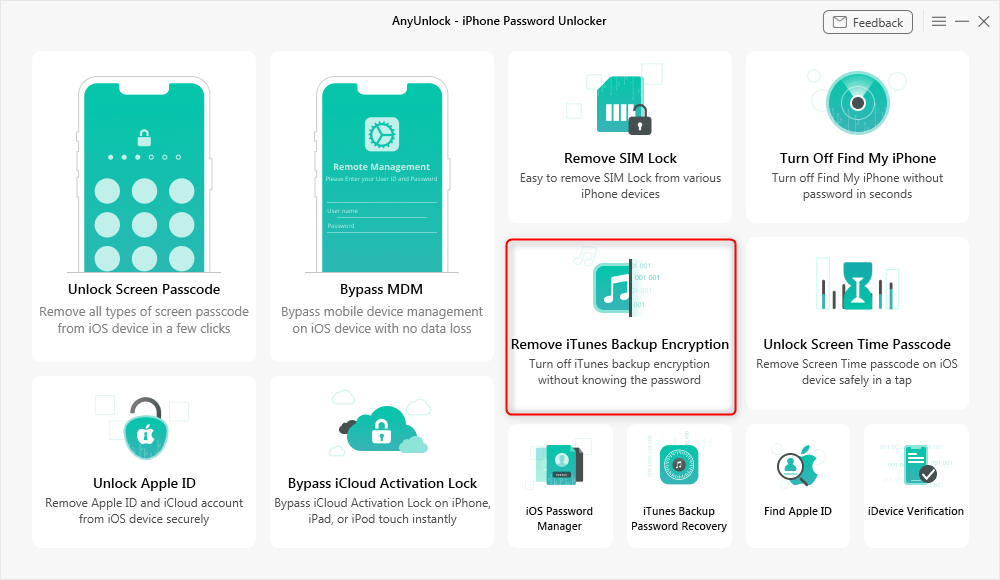 Step 3 – The AnyUnlock directly makes connections with the mobile device. And basic information of the connected device is to be visible there. For that click on the Remove Now button. 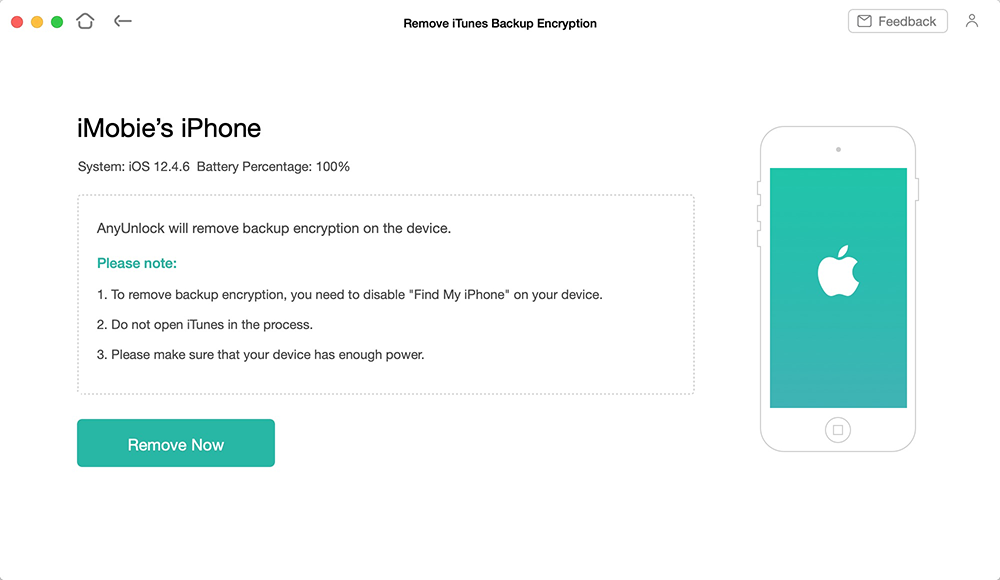 Step 4 – And then the process starts and after a few minutes, the user is completely able to remove the Encrypted Backup Password. 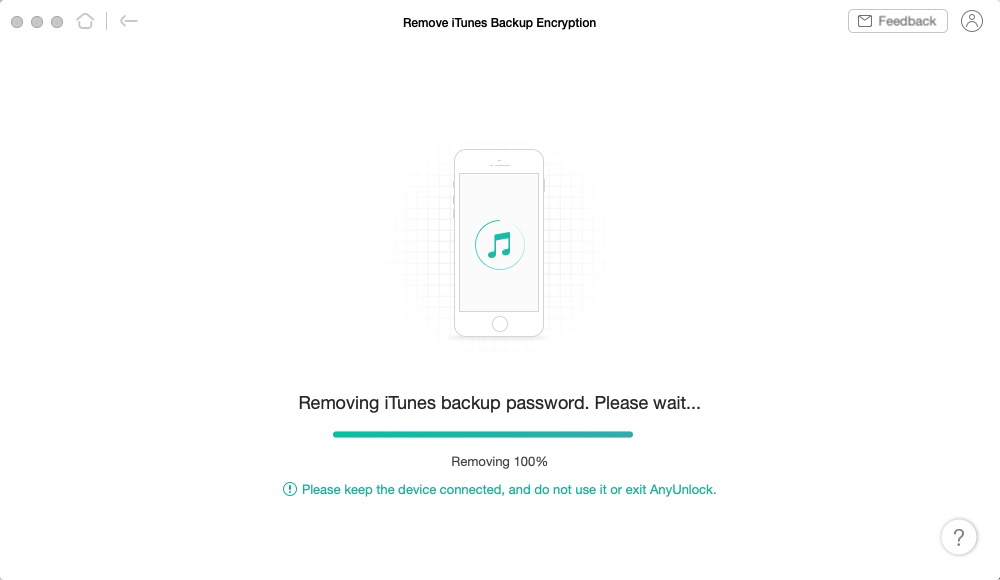 Wait Until the Unlocking Process is Finished

Also Read: How to Fix iTunes Could Not Backup the iPhone Because the iPhone Disconnected >