Get the error message shows you Unable to Migrate, Try Again Later all the time when using Move to iOS app to transfer data from your Android phone to iOS devices? Don’t worry. In the below guide, we will lead you to fix Move to iOS problem – unable to migrate with no hassle.

Apple has developed an Android to iOS transfer app called Move to iOS for users who are going to switch Android phones to the iPhone. After the release of the App, many people started to use it to transfer content from Android to iOS devices, as it is the first app Apple designed for Android phones.

The new iPhone 12 was released on 13th, October 2020, and there are a lot of users have already got the new iPhone now. However, many users keep complaining that they fail to transfer data to iOS devices from Android phones due to some Move to iOS problems, like the Unable to Migrate error, users have to erase data on iPhone before using this app, the transferring process takes several hours, etc.

This tutorial is mainly focused on how to fix the “Unable to Migrate” error. If you are facing the same problems on your iPhone when trying to use the Move to iOS app to transfer your data, then follow the tips below to try to solve your problem.

As there’s no valid reason that tells us why to Move to iOS unable t migrate issue would happen, the below tips are all we can offer for you to fix your problem.

If you only need a special tool for moving data from phone to phone, PhoneTrans is your best choice. It not only supports data transfer between iOS devices but also supports data transfer between Android and iOS devices. With PhoneTrans you can transfer Contacts, Message, Call history, Photos, and more from Android to iPhone in 1-click. PhoneTrans is safe and efficient, and at the same time, it will not erase any existing data on the target device.

Here are the detailed steps to show you how to transfer content from Android phone to iPhone with PhoneTrans:

Step 1. Free download PhoneTrans and install it on your computer > Select the “Phone to Phone” option on PhoneTrans > Click “Quick Transfer”. 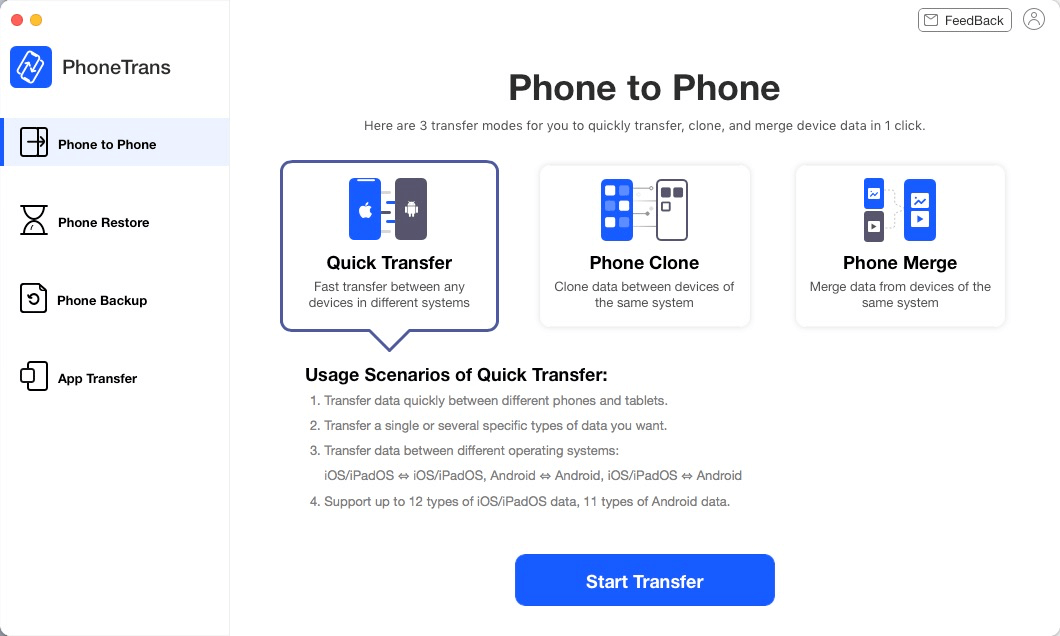 Step 2. Connect both your Android device and iPhone to the computer > You can see the below interface when your devices are detected by PhoneTrans successfully > Then click on the Transfer icon. 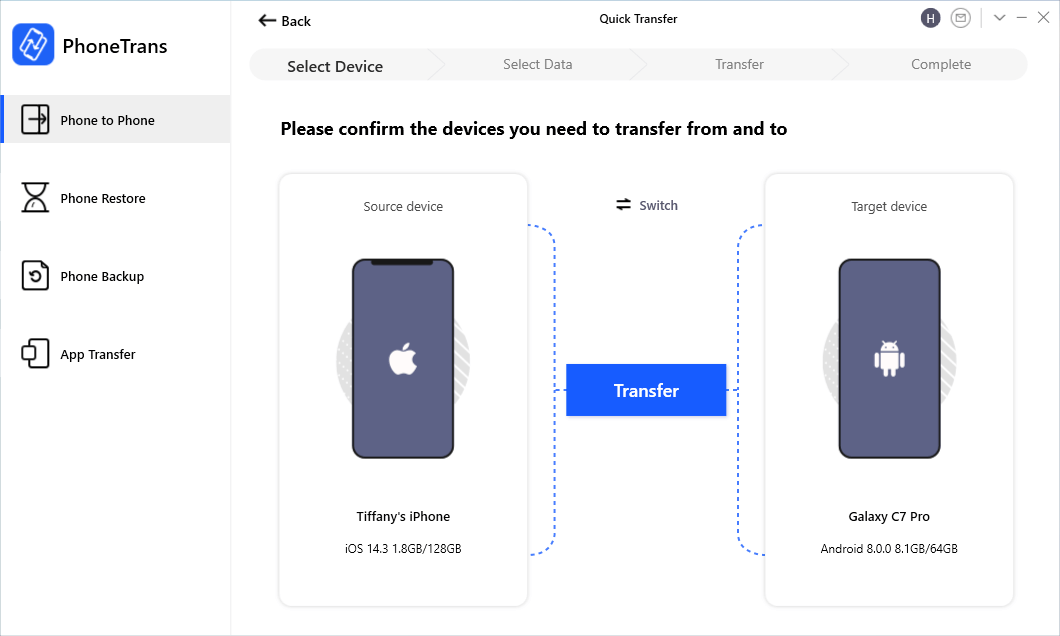 Connect Both Android Phone and iPhone to PC

Step 3. In this step, you can select one or several types of data that you want > Tap on Transfer Now to start the transfer process. 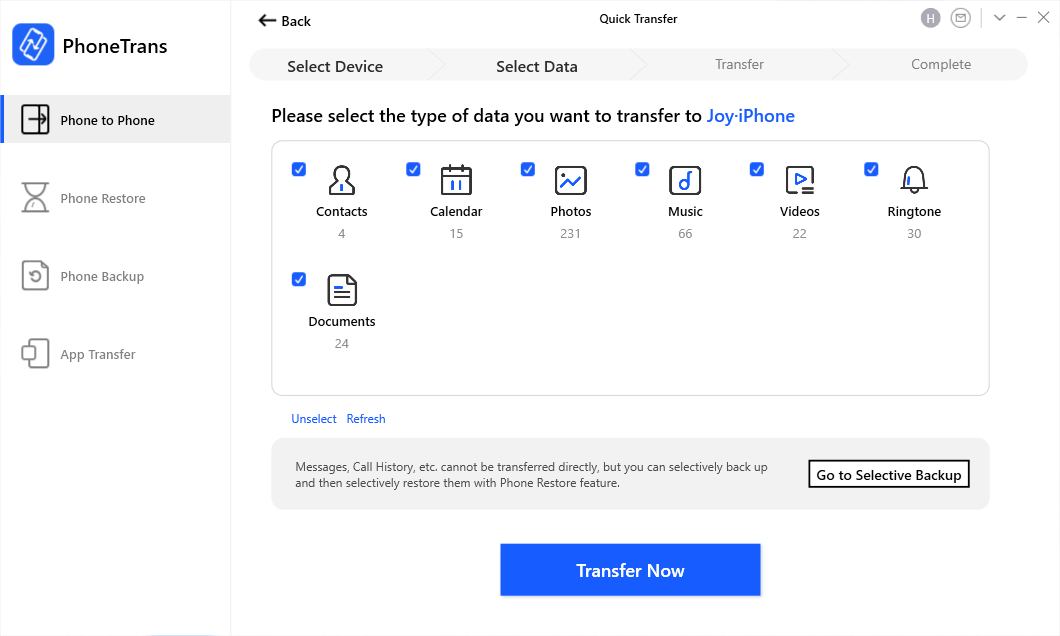 Step 4. PhoneTrans will move the data from your Android phone to your iPhone, just wait for a moment.

AnyTrans supports you to manage your data in daily life and also supports you to transfer contacts, text messages, photos, music, and more important data from any Android phone to iOS devices in a few clicks. With it, you can freely select and transfer specific items you want, and no data will be erased during the process. Now it supports iOS 14 and iPhone 12.

Now, free download and install it on your computer, then follow the steps below to transfer Android data to your new iPhone.

Step 1. Launch AnyTrans on your computer > Connect both your Android phone and iPhone/iPad/iPod touch the computer > Click Phone Switcher on the left side. 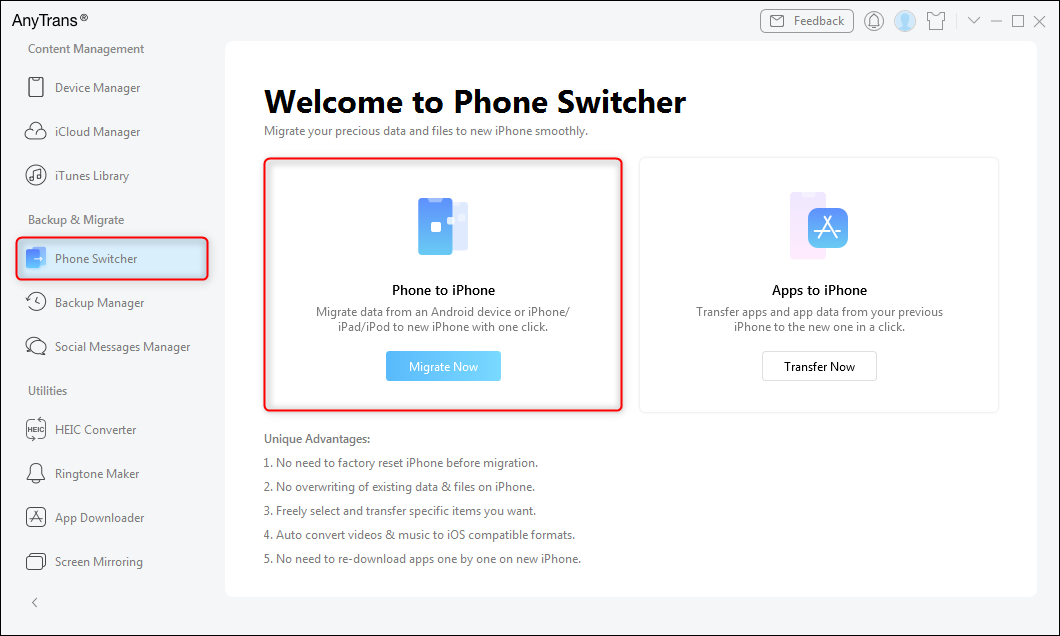 Step 2. Choose the source and target device > Click the Next button to continue. 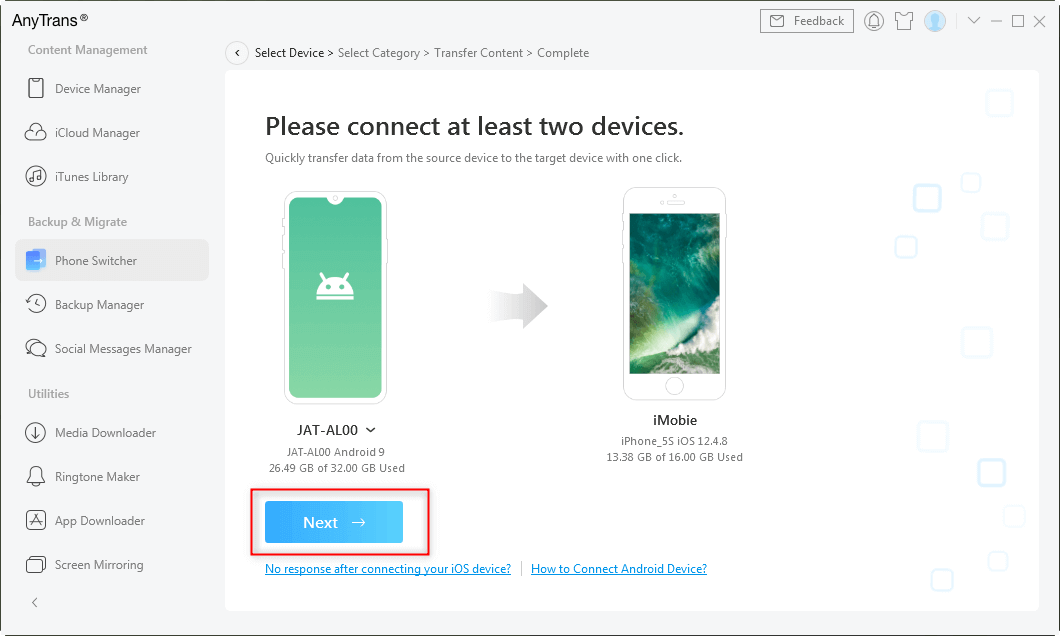 Step 3. All supported files will be listed below. Select the categories you want to transfer and then click the Next button to start the transfer. Please do not unplug your devices during the transferring process. 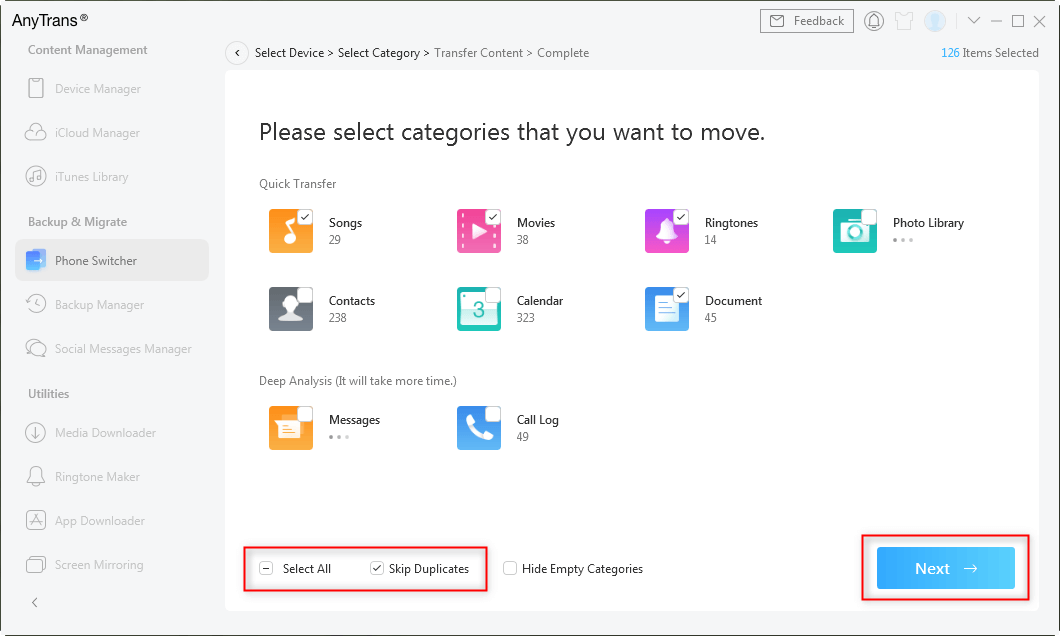 Select Files You Want to Transfer

Besides the Unable to Migrate issue, many users email us that they have also come with some other Move to iOS errors, like Move to iOS cloud not communicate with the device, stuck on transferring/preparing, etc. So, we have collected the top 5 Move to iOS alternatives for you so that you can complete the transferring job via more excellent methods.

Hope the above tips can succeed in helping you fix Move to iOS “Unable to Migrate” error. Failing that, just have a try with AnyTrans or PhoneTrans to help you easily transfer your data from Android phone to iPhone/iPad/iPod.