Voice Memos Disappeared after iOS Update? Get Them Back Here

Voice memos missing after iOS update? Read on this tutorial to learn 3 efficient methods to fix the iOS 14/13/12 update error and get lost voice memos back effortlessly.

PhoneRescue for iOS can help you easily recover deleted voice memos after iOS 14/13/12/11/10 update, no matter you have a backup or not. Free download it to get back your lost voice memos now.

Lately, Apple released its latest iOS operating system – iOS 14, which comes with plenty of new features and improvements. Updating to iOS 14 could be a nice choice to change up your iPhone iPad this year. But it also brings some problems and bugs.

Both the two methods – restoring from iTunes and iCloud backup will erase all data and settings on your device. Also, you can’t choose to restore only lost voice memos, they will be full restore.

In other words, you have to 100% sure that the backup you choose to restore from do include the lost voice memos. Otherwise, not only can’t get back your wanted voice memos, you will lose all other important files. If you are unsure of the iTunes or iCloud backup you made, Method 1 can be the safest way to retrieve your lost voice memos.

Many users may don’t have the habit of backing up their iPhone iPad to iCloud or iTunes. Even though you do make backups, sometimes the deleted voice memos may not be included in the backup. Fortunately, there’s still the possibility to recover lost data even without any backup using some best iPhone data recovery software.

To retrieve deleted voice memos without backup, the only available way is to take advantage of some 100% safe and professional iOS data recovery tool like PhoneRescue for iOS. With its world’s highest success rate, PhoneRescue for iOS has helped over millions of iOS users recover deleted or lost data including voice memos, even without any backup.

Step 1. Free Download PhoneRescue for iOS on your Mac or PC computer firstly > Install and open it.

Step 2. Connect your iPhone or iPad to the computer with its USB cable > Choose Recover from iOS Device mode > Click Right Arrow to go to the next page. 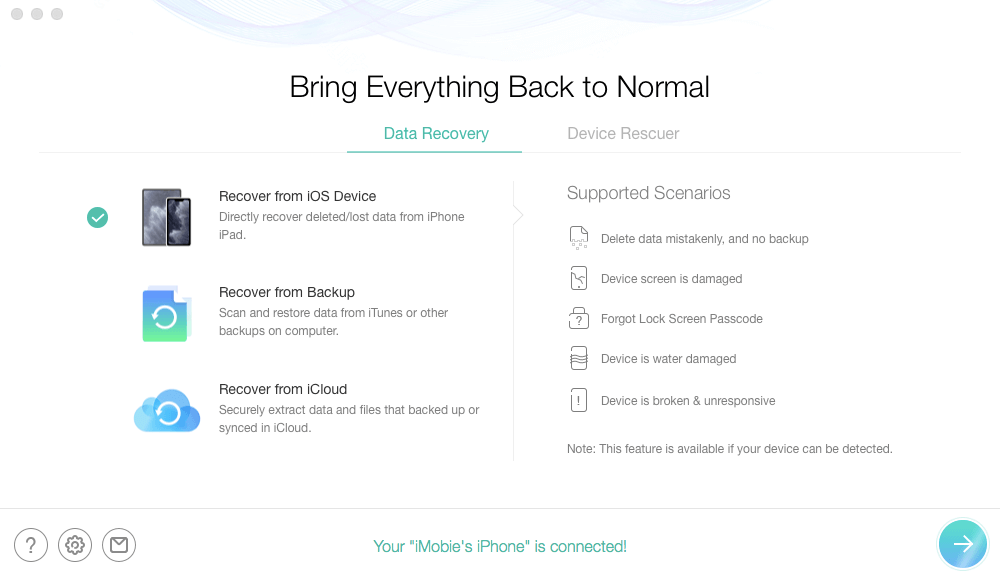 Recover Data from iPhone without Backup

Step 3. By default, all supported categories will be checked. So, uncheck Select All button and check Voice Memos only > Click OK button to continue. 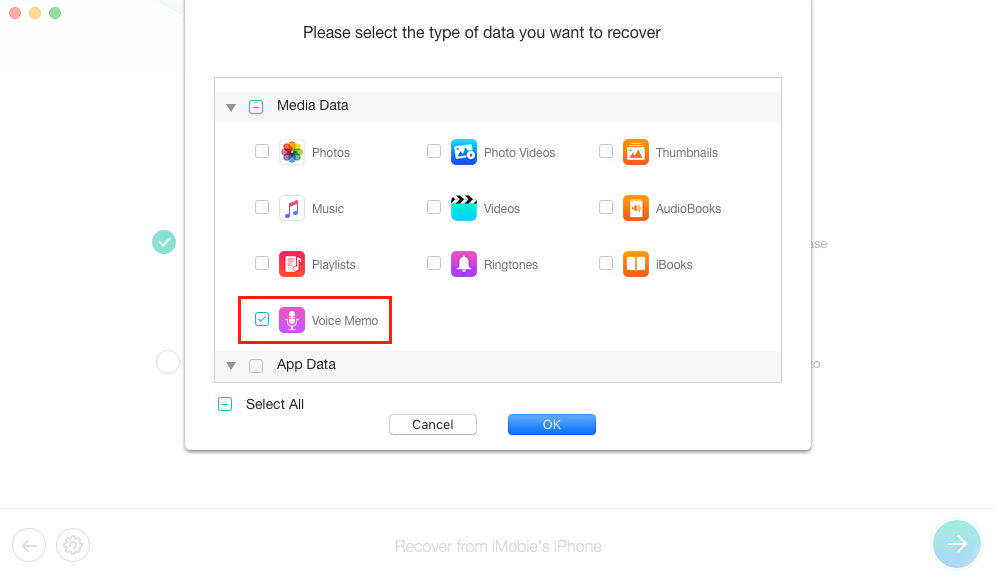 Step 4. Preview and choose the deleted voice memos you want to recover > Click Recover button on the bottom right corner to get them back now. 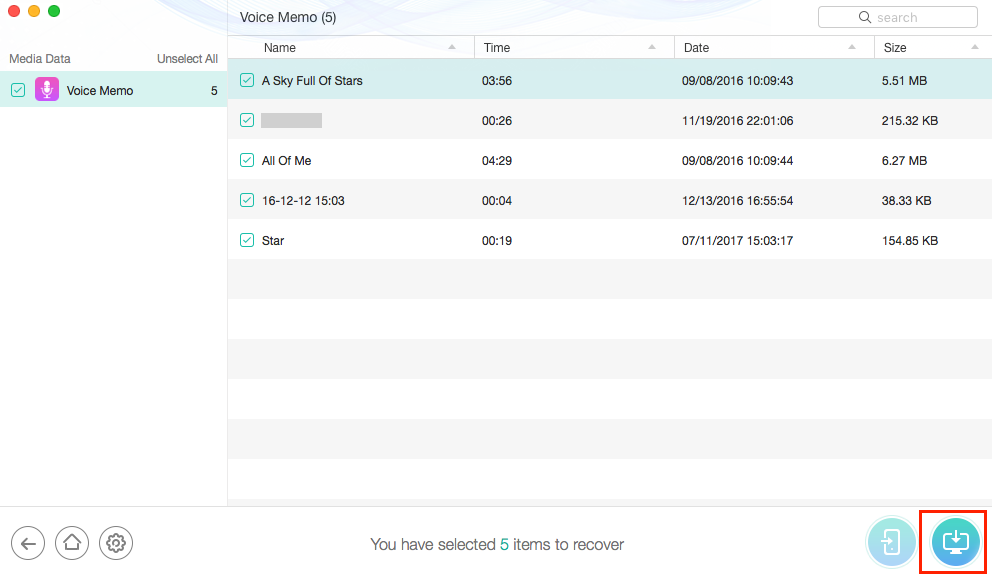 PhoneRescue for iOS also supports to recover lost voice memo from iPad. As a professional data recovery tool, PhoneRescue for iOS provides a simple and efficient solution to get back those important files from iDevices or iTunes/iCloud backups.

If you have backed up your device with iTunes before updated to the latest iOS, then you can easily recover your lost voice memos by restoring them from the iTunes backup.

Step 1. Launch iTunes on your Mac or PC computer > Connect your device to the computer via USB cable.

Step 2. Click the iPhone icon when it shows in iTunes > Click “Restore Backup” as the screenshot shows. 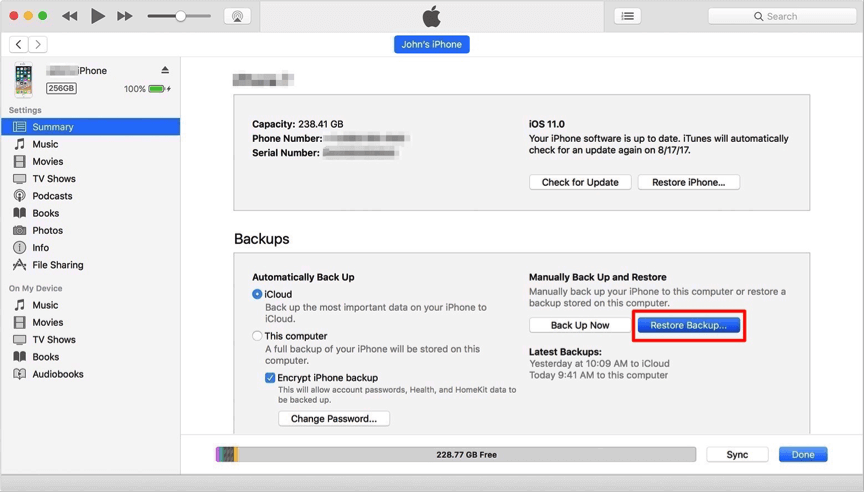 Step 3. Select the backup contains the lost voice memos you want to restore and click the “Restore” button to retrieve them.

If you have made an iCloud backup before iOS update, and you are quite sure that the iCloud backup you made before contains the voice memos you lost, simply follow the steps below:

Step 1. Go to Settings on your iPhone or iPad > Tap on General > Reset > Tap Erase All Content and Settings option. 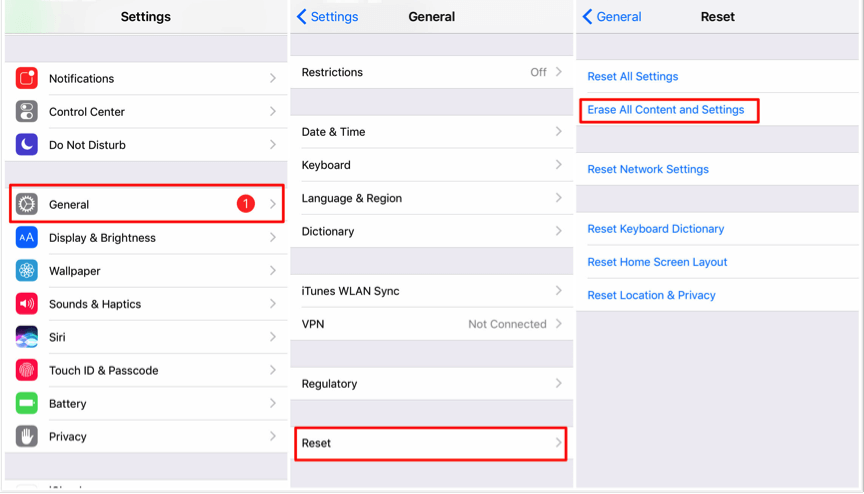 Actually, there’s a way that allows you to check your iTunes and iCloud backup details. Moreover, it is powerful enough to help you restore from the backup even without erasing any data and settings on your device. For detailed steps:
How to Restore iPhone iPad from iTunes Backup without Erasing >
How to Restore iPhone iPad from iCloud Backup without Erasing >

That’s all about how to recover lost voice memos after an iOS update. We sincerely suggest Method 1 to do the voice memos recovery after upgrading to iOS 14/13, as it is labor-saving yet safe. If you find this guide useful, share it with your friends or family.