How to Fix Huawei Phone Clone is not Working

Phone Clone is a free and popular app available out there to migrate data from an iOS/Android device to a Huawei device. While the app is quite user-friendly, a lot of users recently encounter Phone Clone problems and want fixes for that. If you are too going through a Phone Clone problem, then you have landed in the right place to get a fix for your issue. Continue reading our Phone Clone troubleshooting guide to learn how to Phone Clone app works and how to fix the app problems like a Pro.

How Does Phone Clone Work?

Most users encounter problems while using Huawei Phone Clone app because they don’t know how it functions properly. The Phone Clone app is freely available on both Google Play Store and App Store to download and install on the respective devices. Ideally, the app connects the devices wirelessly to transfer your data such as videos, music, photos, contacts, etc.

Not to mention, the exact functioning of the app would vary from one device to another. However, we recommend you go through the following steps to learn how the Phone Clone app works.

Step 1: Download the Phone Clone app on both of your sending and receiving phones. (Please note that the receiving device has to be a Huawei one.) Now enable Bluetooth and Wi-Fi on both the phones and place them closely. On your Huawei device, run the Phone Clone app and set it as a new phone (receiving). 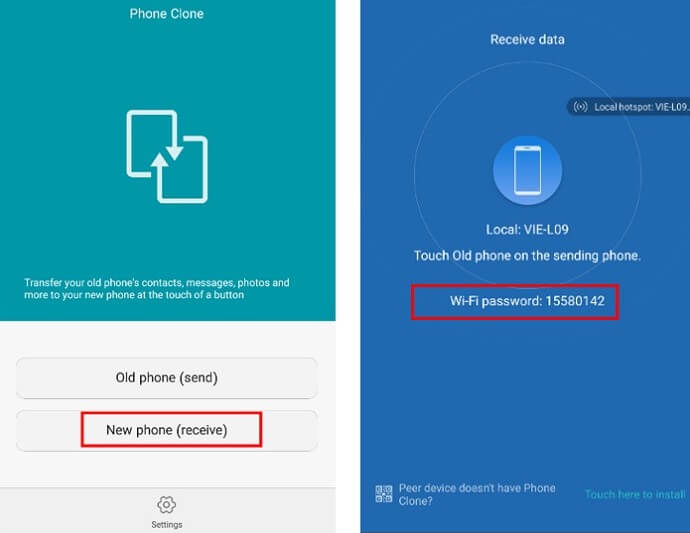 Step 2: Run the Phone Clone app on your sending device and set it as an old device (sending). Wait until the sending device looks for the available receiving device. Once it locates the connected device, just choose it and enter the generated passcode to connect both the devices. 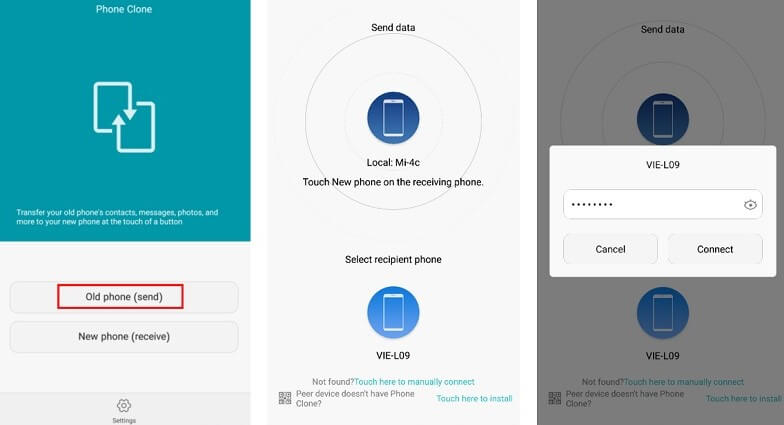 Step 3: Now, you can choose the data type that you want to move to your new Huawei phone. And accept the incoming data on your Huawei phone. 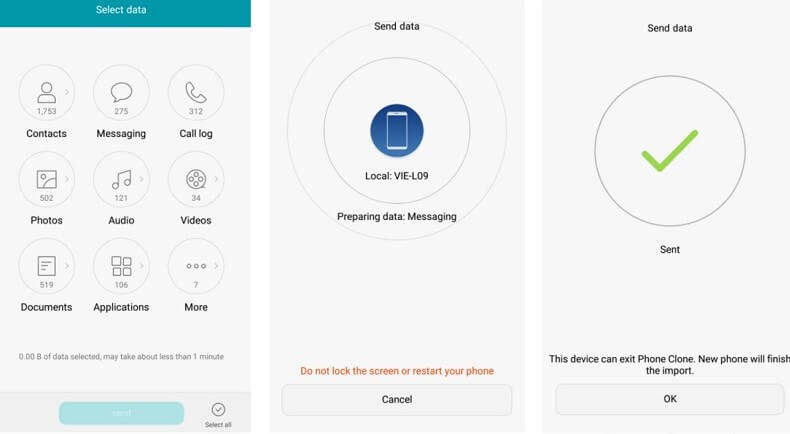 Common Situations and Fixes for Phone Clone Not Working

From connectivity to device compatibility problems, there can be all sorts of issues you can encounter with the Phone Clone app. Below are some of the most common Phone Clone issues and how to fix them without much hassle.

To update the software on the iOS device, follow the below steps: 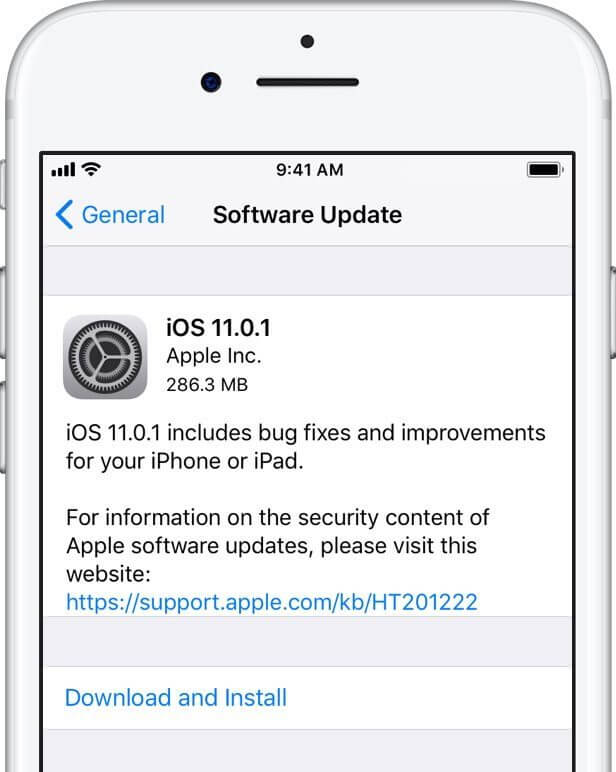 Encounter a connectivity issue between the devices? Or Huawei Phone Clone not connecting both the devices? Well, ensure that both the devices are placed close to each other. In addition, Wi-Fi on both devices should be turned on beforehand. 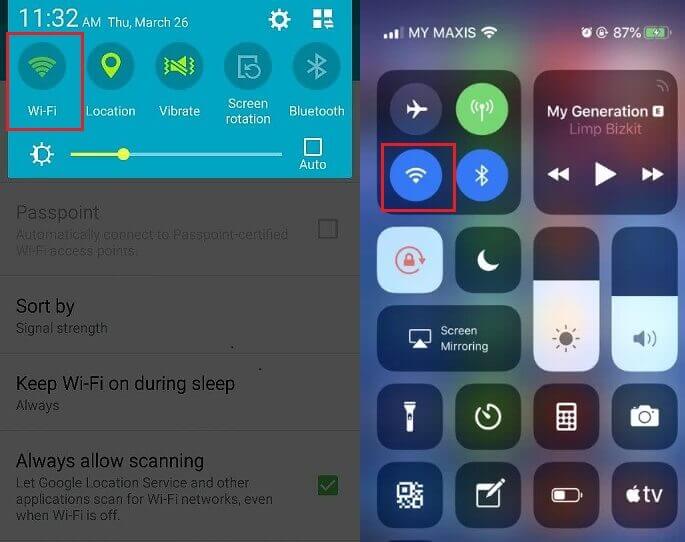 Also, the receiving device needs to be a Huawei device to establish a reliable connection. That’s because the Phone Clone app is developed by Huawei to make sure that the target device has to be a Huawei one while the sending one could be an Android or iOS.

Problem 3: Can’t Move All Data in One Go

While migrating files from any iOS/Android device to a Huawei device, a connection between the devices could break. If that happens, then you will not be able to move all data. In order to resolve this, ensure that both the phones are placed nearby. Plus, you should not quit the Phone Clone app during the transferring process.

If the connection still breaks, then go to the device’s settings and just turn on and then turn off the Airplane mode. After then, try to transfer your files again using the app. In addition, ensure that there is no VPN installed on your device as it would interfere with the transferring process. 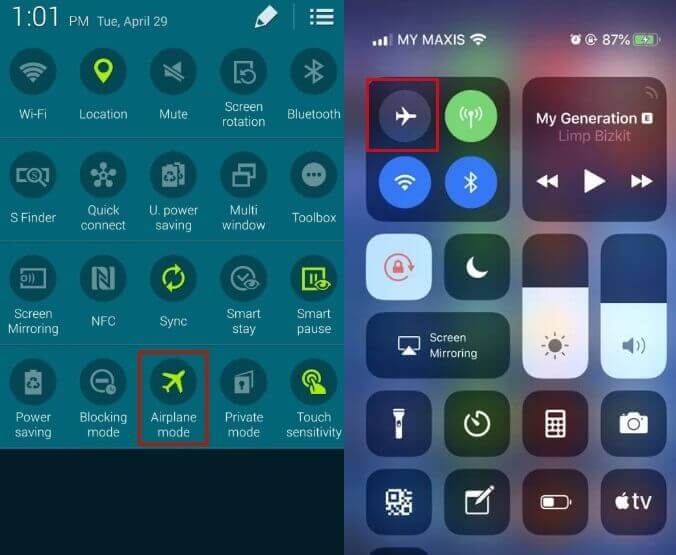 If the Phone Clone keeps crashing, then you should reinstall the app and then download it again from the Google Play Store or App Store. Or you can wipe out the cache of your Phone Clone app.

To clear the cache of the Phone Clone on Android device, go to your Settings > Apps > Phone Clone and click on the “Clear Cache” and that’s it. 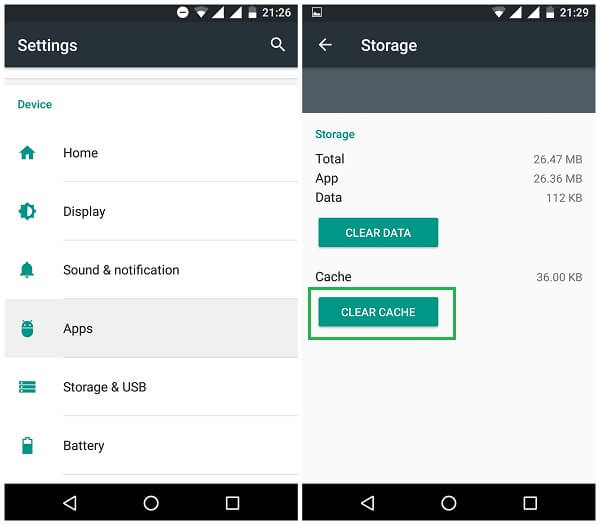 That’s what to do when Huawei Phone Clone not working. Here, we have covered every Phone Clone problem scenario and what you should try to fix the issue.

Further Reading: How to Clear Cache on Android Phone >

Considering the Phone Clone problems, it is understandable why you want its alternative. Here comes AnyDroid. Whether you want to transfer content from iOS to Android or Android to Android, AnyDroid comes quite in handy for that.  It can help you transfer all common file types including messages, photos, apps, videos, contacts, etc. Indeed, all iOS data will be automatically converted to Android-friendly formats.

What’s more? AnyDroid is compatible with a wide range of Android devices, be it Huawei, Samsung, Google, Lenovo, and a lot more.

To learn how to use AnyDroid to transfer content from iOS/Android to Android device, follow the below steps:

Step 1: Get AnyDroid on your computer. Run it and connect both the devices to the computer with USB cables. 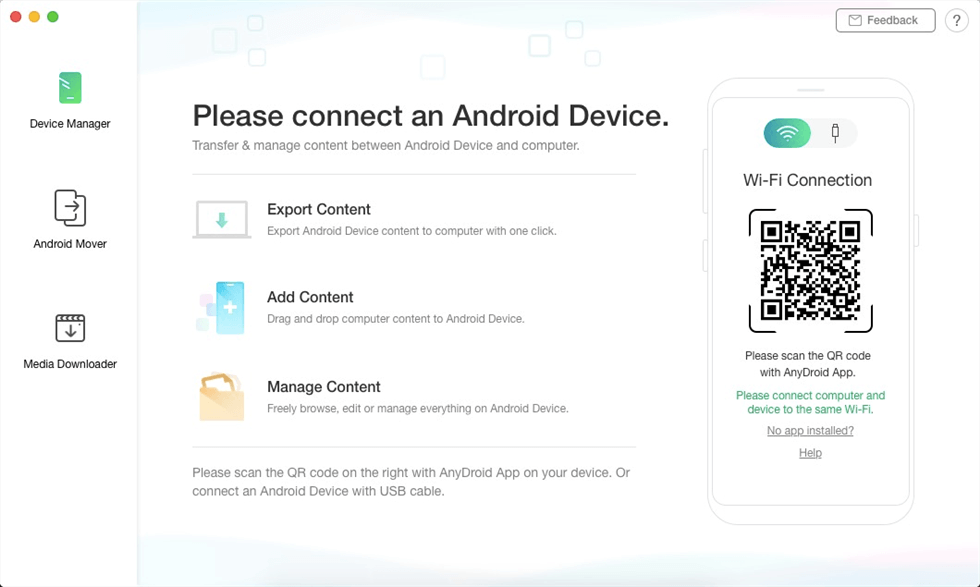 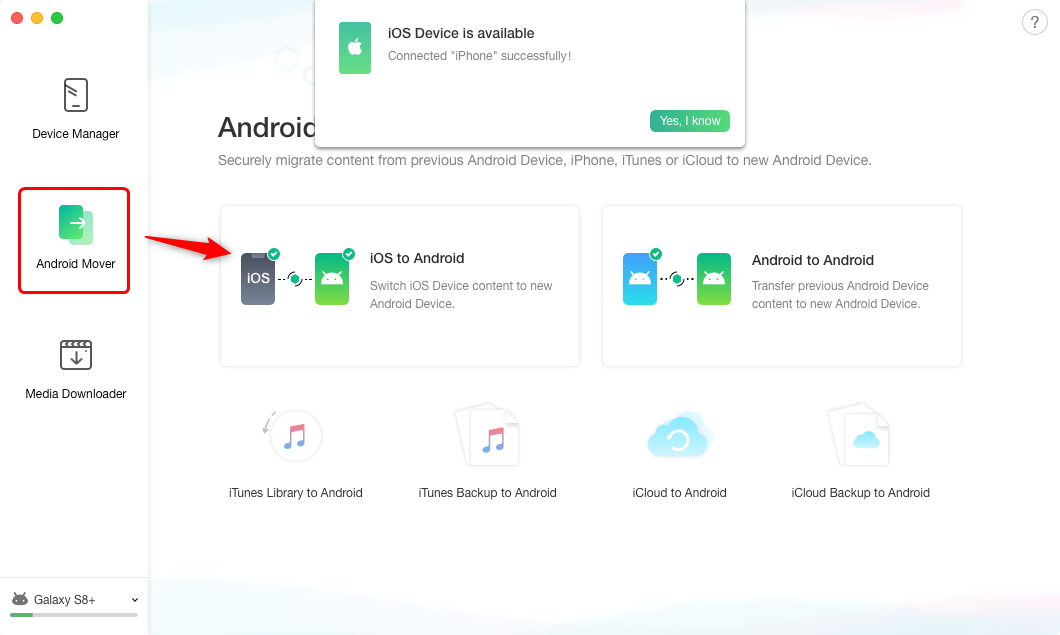 Step 3: Now, select the file type that you would like to transfer (here we take Messages as an example). 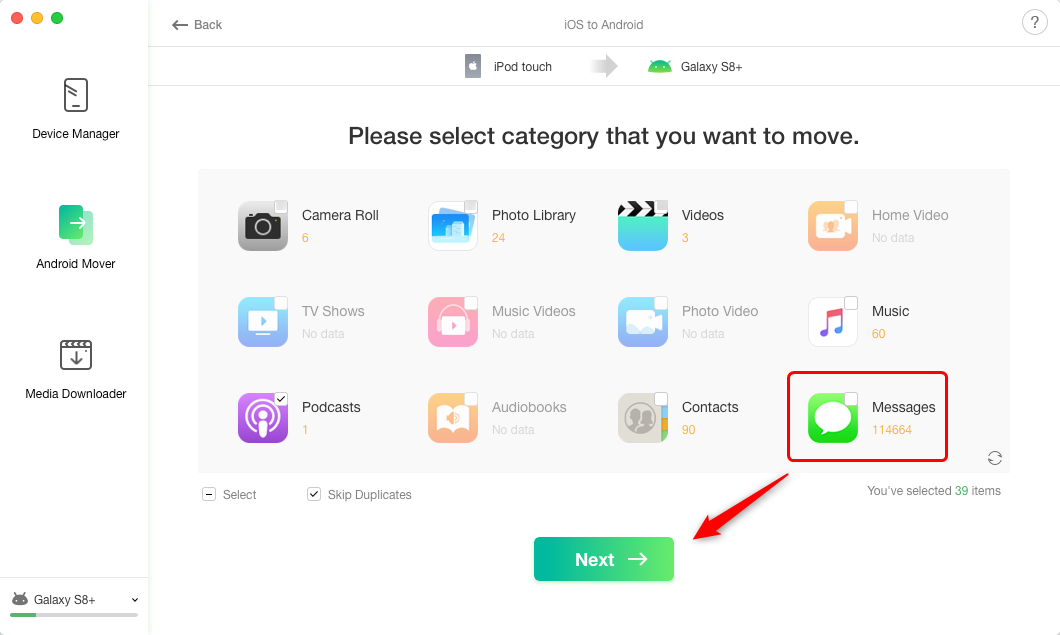 Select Messages and Tap on Next

Step 4: Once you tap the “Next” button, the software will begin with the transfer process. Wait a minute and you will see transfer completed page. 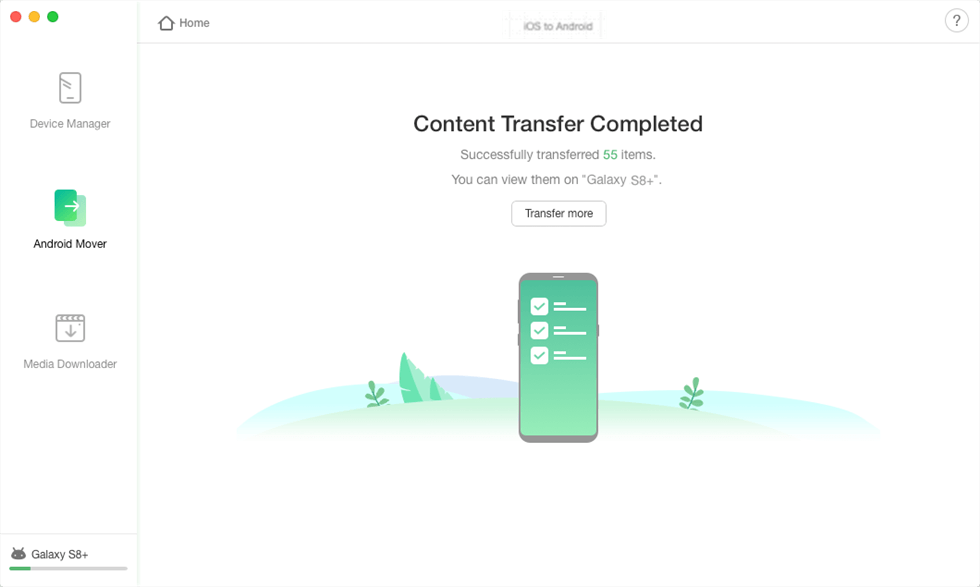