Android phones are widely used and favored by people all around the world. Nowadays, there are more and more mobile users who choose to use Android. Sadly, we accepted some feedback that some users encountered apps that won’t open on Android recently.

Previously, we have already talked about how to fix apps not opening on iPhone issues. In this article, we will mainly discuss the possible reasons why apps failed to open on Android and how to fix this issue with ease.

Why Won’t My Apps Open on My Android?

Suddenly, an app or some apps won’t open on your Android? In this part, I’d like to brief you on some specific reasons why an app or some apps are failed to open on Android phones so as to fix this issue correspondingly. The possible causes of the app won’t open on Android might be no internet connection, the lack of storage space, corrupted software, data crash, and the outdated operating system version of your Android.

How to fix Apps Not Open on Android Phones?

In this part, 6 effective solutions will be presented to help you fix apps not open on Android phone issues. Next, browse and choose the solution you prefer to easily address this issue!

Therefore, when you encountered apps that won’t open issue, please check the internet connection of your phone at first. This is useful for both Android and iOS devices.

As we mentioned above, the lack of storage space is also one of the major reasons why apps can’t be open smoothly on your Android. Under such circumstances, you’d better delete some useless apps, pictures or files, etc. Moreover, you can clear the cache and data of the app that won’t open on your Android.

Run your Android > Head to the Settings app > Find and click App manager > Choose the app that can’t be opened > Choose Storage option > Click clear cache/data to make space for the app. 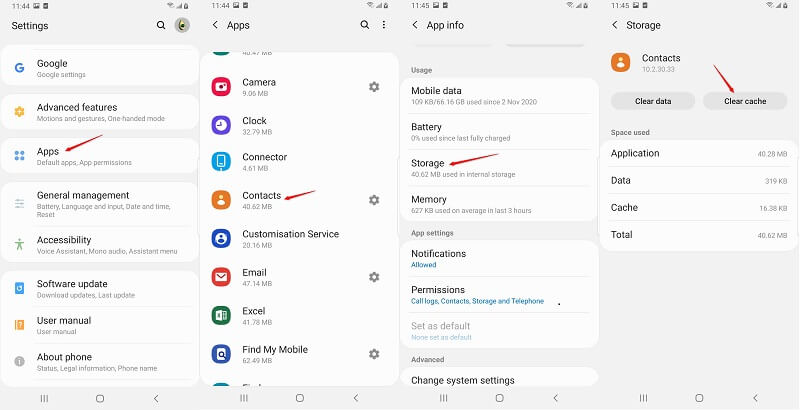 When an app doesn’t working or can’t be opened, force closing and then restarting it might be a solution that is simple and effective. Here are steps to force close the app that won’t open.

After force-stopping the app, you can try to reopen it once again to check whether this solution works. To be more convenient, you can clear all the background apps that operating on your Android by accessing the multitasking interface and swiping these apps to close them.

Some apps can’t be compliant with the outdated operating system, that’s why the app won’t open on Android. Hence, you can go to Settings on your Android to check whether there has the newest OS version. Here, I will tell you how to update the Android operating system to the newest one.

Go to the Settings app on Android > find the About Device/Phone option at the bottom of the interface > Choose Software Update > if there has a new OS version, just click Install Now button to download and install the latest Android operating system.

Way 5. Update or Reinstall the App That Won’t Open

Updating or reinstalling the app is one of the solutions that worth having a try as well. To update it, you can go to the Settings app on Android, then click the Apps Manager option > choose the app that won’t open > click the update option if there has a new version of the app. In addition, you can uninstall the app and then download and reinstall it to fix the app that won’t open the Android problem.

When you fail to open the app, one extremely simple way you can have a try is to restart your phone which can fix most of the simple issues of both Android and iPhone. You can press the side button on your Android for a while until your phone pops up an interface, and then please click the Power Off option. After that, you can long-press the side button once again to restart it.

However, from my perspective, you’d better try the methods mentioned above at first, for resetting Android to factory setting may cause data loss and some other problems.